I've  finally managed to finish of my initial unit of Rifle Volunteers. Some photos included. These figures are castings from GBE of Conningsby, and I started them some years ago. I'm not sure where the blue facings came from, but I seem to recall some idea of using them as 1815 Brunswickers! The paintings not brilliant, I need to practice my fine lines and colour seperation, but they are adequate. They are a 'Big Wars' unit of ten plus officer and mounted on a movement tray. One of the photos shows how they can be removed for open order or as casualties. 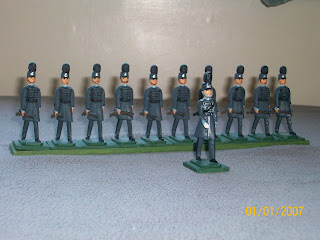 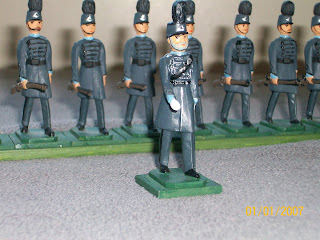 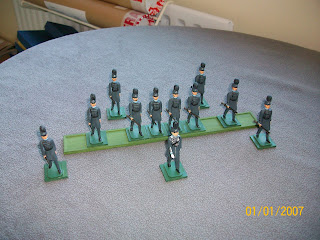 And here is A Battery RHA. Hopefully to be followed by B Battery complete with team of horses, (I.m trying to pluck up courage to start on it as I have a set of Langlay castings waiting). Also sitting on a movement tray for ease of shunting about, this unit has been hiding away, complete, in the loft, which is why it is not a volunteer unit. 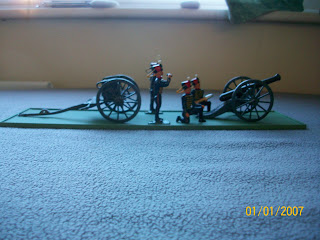 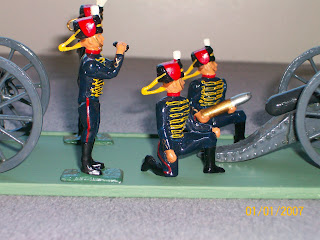 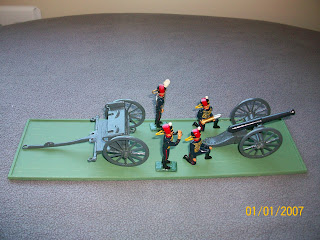 p.s. I see that the photos are dated 01/01/2007, this is because
a) I'm using a small hand held cheap digital this time, rather than my SLR
b) I didn't realise there was a date setting until the photos appeared on the laptop.

I'm now working on a couple of light cavalry regiments, which will appear eventually. I do envy these people who can knock out a brilliantly painted unit in a metter of hours.
Posted by joppy at 07:42