Having persuaded myself that it is too cold in the shed to do much railway modelling I have looked back into batch of kits I bought from my project book to find something to occupy myself indoors over the winter months. Among my old ideas is a collection of 54mm conversions from old Britains figures, depicting the various Victorian Rifle Volunteer and Yeomanry regiments of the UK. This will be on top of the pile of kits I have outstanding from the Tradition range.

In order to get on with it I took the plunge and ordered a mould making pack from Alec Tiranti. It will sit staring at me daring me to get on with the job. 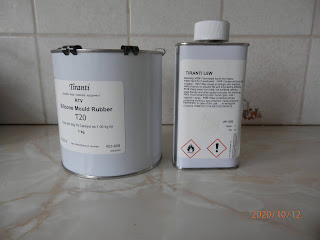 So, I took a figure I bought cheap some years ago at the London Toy Soldier Show, and stripped it down. Once the paint was off it became obvious that it was a conversion, so I didn't feel too bad about removing the paint. The gaiters had been filled in to make full trousers, while a new head had been fitted. 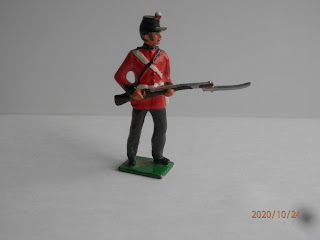 Once stripped I removed the original base and stuck the casting onto a 2p piece, filling the face and smoothing it off (can't have the origin showing) and the figure is ready for the mould making experience. Once moulded and cast it will give me a nice basic figure to build up the equipment and so forth. I will be able to rebuild the trousers for those figures that require them and I can fit any of an assortment of headgear required. According to my references these vary from the standard rifles shako through pill box hats to a Bersagliari style hat.
I already have a few figures made from the Fort Henry Guard, and that figure will appear again. Possibly with different heads. 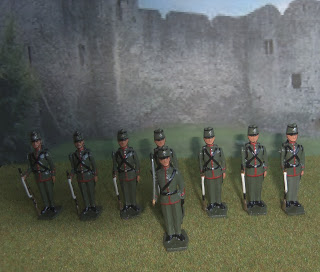 That's the start of things. I'm currently painting a sample figure for a new unit, watch this space for pictures when it's ready. Mind you, it's half term next week, and grandchildren sitting (their hardly babies now) takes precedence. I'll also pop down my thoughts on cavalry figures to come.

For my sins (I once put some toy soldiers into one of their sales) I receive occasional updates from the auction house Vectis, who specialise in toys and related ephemera. The latest, which arrived in my inbox today, has a collection of fire engines (Oct 20th), Matchbox and modern die-cast (Oct 22nd), model trains (Oct 23rd) and on October 27th; a sale of 'books and works on paper'.

A quick look shows that this includes  Science fiction and fantasy, Israel history and culture, space, humour and cartoon books - and military history. The latter has some 30 lots (I may have miscounted) and if you are interested in seeing what is on offer (with initial price guides) you can go to the Vectis website, find the appropriate forthcoming auction then look at the section of interest. Here you will get a picture of each lot, normally in cardboard boxes that don't appear to be too specific in selection. An enlargement view lets you investigate some of the titles and conditions. I did notice and box labelled as from the collection of Andrew Rose (those of us of an age will recognise the name from the toy soldier world).

I had a good look round the lots, and saw some books of interest to me, but they were mixed with others I don't need. Also, MrsJ tells me I have too many books, so I won't be bidding.

Have a good browse, it might give you ideas on the worth of your own collection.

As I mentioned a couple of weeks ago, I ordered the new 'Great Powers' moulds of American and German toy soldiers from Prince August. These arrived a few days ago and I've had a little practice. I must apologise for the picture quality, but they were taken on my workbench in the garage and I forgot to turn the flash on! 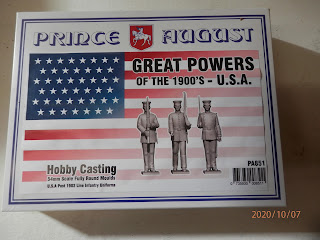 box top of the USA set 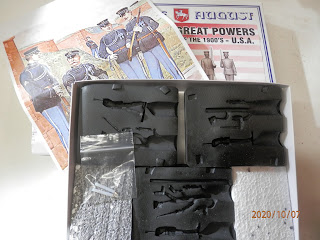 contents of the USA set. three moulds plus a coloured picture 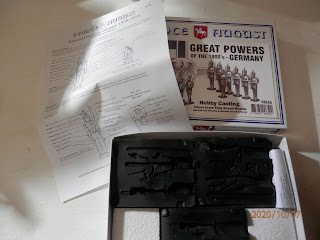 contents of the German set. three moulds and diagram (no coloured picture this time 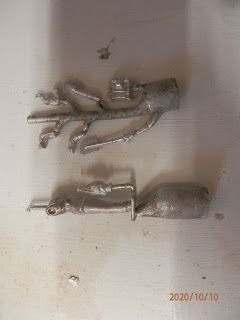 first pouring from the German mould. I really messed up here, as I forgot to put the little rods (supplied) in place that would ensure neck holes for the head would be pre-cast. Also, the face came out with no definition, looking a bit like Lord Voldemort in the Harry Potter films. No doubt I'll get it right eventually.
I shall persevere sometime this coming week, but Julia has to go into hospital for a colonoscopy/endoscopy tomorrow and we're not sure what the outcome will be.
More later. Keep safe and well.
Posted by joppy at 04:02 4 comments:

Just a quick enquiry. I'm after some 54mm moulds that were available last year from a firm called Miniature Molds. Their internet existence seems to have disappeared. Can anyone say if they are still trading or changed name? If so can I have contact details.

I'm after some of their British Napoleonic moulds, which look like Airfix figures, so they may have had copyright problems. I know, back in the day, I got permission from Airfix to do recasts, but they have changed hands since and, although I still have the authorisation letter, the new owners may not look kindly, even though I only want them for personal use. My old moulds have deteriorated and been disposed of and I don't need the hassle of making new ones.

Thanks for any help you can give. It is appreciated.