Finally, after quite a few letters (e-mails really, but I still think of them as letters) I've managed to obtain my Great Grandfather's service record from his time in the Royal Marine Artillery. All I have to do now is work out how to read it as it is in beautiful copperplate handwriting and some of it barely decipherable. 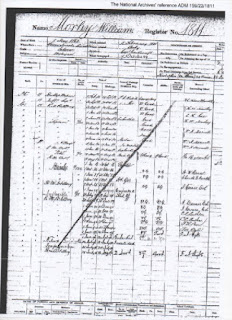 As far as I can tell at a quick glance he enlisted in 1881, when he was 19 years old, and was invalided out in 1896 when he was 33. During that time he met my Great Grandmother (1884) and my grandmother was born in Portsea, Portsmouth in 1892. He died in Spalding, Lincolnshire in 1901 very young and very suddenly, as there was an inquest held. That's my next job, find out how and why.
Once I've finished with him I have two grandfathers to chase up, both serving in WW1, and I already nhave my father's records from his time in WW2 when he served the whole period on the flower class corvette, "HMS Pennywort", pootling backwards and forwards across the Atlantic with a foray to the Normandy beaches. For those interested, HMS Pennywort features in Martin Middlebrook's book, Convoy. Unfortunately my father was due to be interviewed by him but died before it could happen.
This family tree stuff is intriguing. Reference my Great Grandfather again, he died as I said in 1901, but his widow had two children after that, the last in 1905! I wonder if they knew?
,
Posted by joppy at 01:47 3 comments:

Well, here we are going into lockdown again for (at least) a month. Good job MrsJ and I have just done our monthly shop (think we are alright for toilet rolls and flour). Took a trip to the library as well, stocked up with reading material so we should be covered. I recently discovered M.C.Beaton's 'Hamish Macbeth' stories so I'm working my way through those, and I've started on the Perry Mason books which I get on my Kindle reading device. They should keep me going. Another series that I recommend is by Mick Herron, and concerns a group of washed up, disgraced and embarrasing (to their chiefs) spies from the intelligence service.

Having, in one way or another, blotted their copy books (or in one case being framed as having done so) this varied group of misfits is seconded to an annexe called Slough House, where they are given menial and meaningless tasks in the hopes that they will get fed up and resign. The first of the novels is called Slow Horses, a play on the address  and what the service calls them. There are a number of other titles, some only short novellas, and they need to be read in order, as the author ,Nick Herron, has no qualms about killing off major characters along the way. 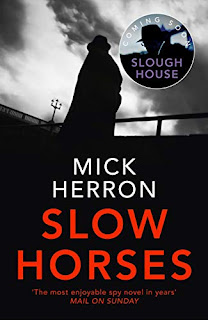 Definitely not the romantic vision of a spy, I recommend them for a long dark evening.

Back to military matters next time, photos still in the camera.