Book of the Month

For various reasons I've got very little done this month. My schedule for January is already three weeks behind! So, for lack of anything else, here is another volume from my bookshelf. 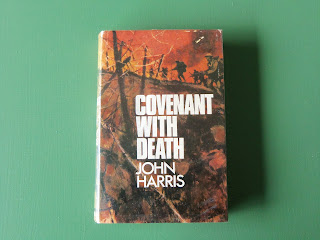 Covenant With Death, by John Harris, originally published in 1961, is one of my favourite items of fiction from WW1 (along with the African Queen and Brown on Resolution). This novel covers the story of what is basically a 'Pals' batallion from the north of England, following it from the early days of the war, through recruitment and training, initial actions in the Middle East, and finally to the first day of the Somme. The last chapter, concerns the few survivors of the day returning and the welcoming officers realising how few there are coming back. I've allways thought this book would make an ideal TV series as a centenary project for the BBC (but perhaps Blackadder did it better?)

Now a technical query for you expert bloggers out there. I'm hoping to add some extras, and would like to include the 'labels' I see on other blogs. Question is, once I get the gadget up and running do the headings come up automatically, or do I break entries down as I put them on?
Posted by joppy at 10:07 4 comments: