Just finished two new units for my volunteer forces. The first is a unit of Lincolnshire Yeomanry in their dress uniforms. First formed (in this incarnation, there had been previous yeomanry regiments but disbanded) in 1901and disbanded in 1922, the regiment saw service in Palestine and France during WW1, Most of the members did not own (because of cost) the full dress uniform, and I'm informed that it was unlikely the regiment ever used lances! The figures are based on Langley models items. 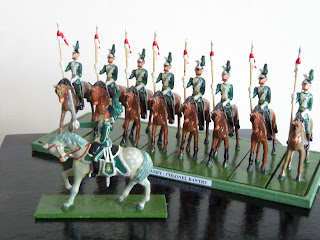 The second unit is a bit of a mish-mash. It is an imaginery unit, made up again of various Langley pieces. I had four privates, a standing officer and a mounted officer already, from some years ago, so I ordered enough items to complete the unit to my normal regimental size. Unfortunately it wasn't till I had glued them all together and started painting that I realised I had the wrong head on the new batch. This unit is rather special, as it is the only one (currently) in the new khaki service dress,the only one without a 'County' designation, and it's the only one where each member is named.. Because of this I have called it 'The Gentleman Pensioners' . It is commanded by Colonel Grant with the officer on foot being Lieutenant Wells. The other members of the group are, in no particular order, Tunstil, Young, Lawford, Wise, Quarrie, Stevenson, Asquith, Featherstone and Perry. All familiar names. Their is one private so far unnamed, and I'm torn between Suren or Stadden, though perhaps I should go with Britain? 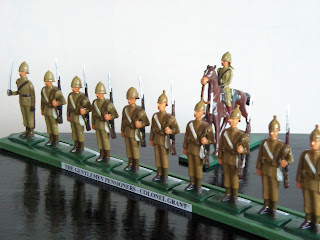 I've spent today undercoating figures for another three units, but they will have to wait now, as we are away for the weekend, helping my sister-in-law celebrate the Jubilee at her village in Northamptonshire.

Have a patriotic weekend.