One of my other hobbies is woodwork, especially small projects, and over the years I've built up nearly a full collection of Hobbies Weekly design sheets from the 1930s to late 50s when they ceased publication. These design sheets were issued free with the magazine, sometimes every week, but more often at fortnightly intervals, and 'specials' with the annual.

I was recently browsing for fretwork projects and was directed to a site called  http://www.finescrollsaw.com/  which had a numbeer of downloads, one of which is the following - 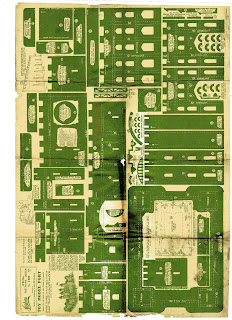 (apologies, but I can't seem to get it the right way up) - anyway, it makes up a model representative of the Tower of London on a base of 2foot 3inches by 1foot 6inches, with the tower as a seperate, lift out, unit. The dowload printed out at A4 size, so it's a case of maths and a visit to the copy shop. A summer project for those long light evenings.
Posted by joppy at 12:51