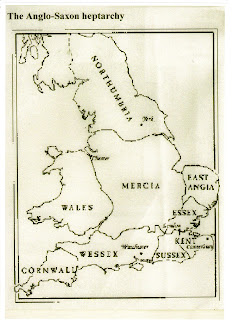 Here is a map, from some site on the web (possibly Wikipedia) showing the Anglo-Saxon Heptarchy, or the basis for my alternate 19th century Britain. As I said last time, I'm currently working on the political and military 'what is what' for the various kingdoms, and trying to find reasons for various disagreements. These will mainly be over the various successions as they become available, or complaints about trade and border disputes. I'm not going to go into great historical detail, or worry much about what is happening in the rest of the world, though the various French Republican Wars and the wars between the French and Spanish areas of America (ACW in disguise) will bear upon us, as well as the various attempts at German and Italian unification, as many in our little Islands favour a similar structure, so further grounds for military argument.

The full text may take some time, but I will let snippets fall as they become available. 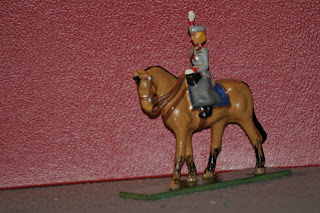 In the meantime, here is a photo, with apologies for not being as sharp as I'd like it to be, of Grand Duchess Gloriana, ruler of East Anglia, newly repainted (see the post of Nov 16th for the original) in her parade uniform. The only alterations to the model are a base and new plume.

Uniforms for her army are decided, the infantry are in various shades of grey, with a couple of greens. I'm having difficulty tracking down the appropriate style of flat topped cap (which no manufacturer, at least of parts, that I've contacted seems to make. I've had various alternatives but they all need work) I'm hoping that my trip to the Toy Soldier show on saturday will help. If not. I'll have to go the long way of conversion, mould making and casting my own heads.

Cavalry, only four units, are a mixture of lancer, hussar, and dragoon uniforms. Artillery currently stands at one Langley field gun and Horse Artillery crew, with a limber and team waiting to be made up.

I shall try to get some more photos of the finished units out by next time.
Posted by joppy at 10:24 4 comments:

I know I promised some background to my alternative British Isles this time round, but I'm still working on the fundamentables, si that will have to wait. In the meantime, here are details of a couple of book titles that I've seen reviewed and have booked from the local library.
1. Vanished Kingdoms by Norman Davies, which is an 'examination of half-forgotten duchies, kingdoms, empires and republics, providing an original and surprising perspective on Europe's history'. Should be an interesting read.
2. The Sleeping Army by Francesca Simon. A novel set in  world where Christianity never happened, so Britain never stopped worshipping the Norse and Anglo-Saxon gods, hence the state religion, headed by the Queen, is Wodenism - and nobody is called Christopher. I think it's meant to be a children's 'fantasy' title, but that never stopped me before.
Knowing our local library I may have to wait some weeks.
Posted by joppy at 14:38 1 comment: 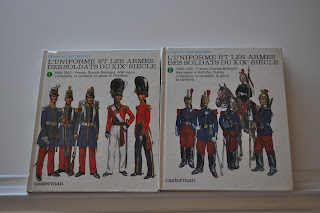 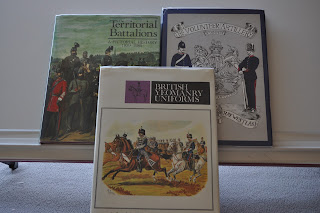 I thought I'd show a couple of photos of some reference books I'm using to base my various army uniforms on. This first one is a splendid general overview of the main European armies throughout the 19th century, and I think the illustrations have a lovely 'toy soldier' look about them.

Second we have just three of my small collection concerning the various volunteer forces. I've practically worked out the order of battle for a small division using these units, and am currently trying to source figures with a particular headgear for a couple of them. No one seems to make exactly the right sort of straight-sided peaked cap that I'm after. I shall be going to the Toy Soldier show on Dec.3rd to try direct research. 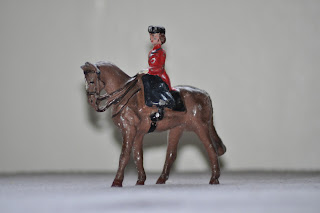 Next. a picture of the figure I picked up on e-bay recently. This is a little worse for wear, but when i've got the paint off  and rebuilt a plume I shall be painting it as Grand Duchess Gloriana, in a grey based uniform suitable for the armies theme.

Meanwhile, in the shires, recruitment goes on. The recruiting sergeant has been out with his shillings dragging in the willing and unwilling. These three figures are based on a painting by the artist Colin Carr, and were mastered by Kieth Over of Whittlesey Miniatures some years ago. 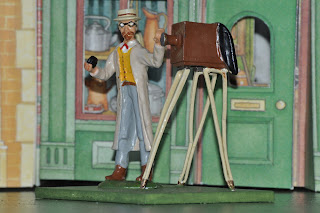 The final photo is of Mr William Freese-Greene, official photographer for the 'Daily Messenger'. This little chap and his bulky camera get everywhere, and we'll see some of his work later. He has got a small Ford T which he uses to get about but it doen't appear in the photo.

While I wait for a delivery of troops to paint I'm catching up with a few of the personality castings I have lying about. Currntly on the painitng table are Ashenden and Altamont, the spies, with their boss M. If we're lucky we may get a picture, but they do like to be discreet.

I shall follow this up with Mr Llanfanihagel Penbedw, newly elected President of the Republic of Wales.

Next time I'll try give a little background on our alternative little Island and its make-up, politics, and of course, it's little arguments.
Posted by joppy at 02:48 1 comment:

I should have mentioned that I'm not ignoring comments or the Blogs I follow. I've tried to place comments occassionaly, but get told I'm not registered to do so, even on my own blog! Haven't worked out how to get round it yet, but will be checking with my IT expert when she gets back from a holiday in Las Vegas.
Posted by joppy at 13:26 2 comments:

I haven't yet decided all the infantry or artillery units to have, so the names are currently blank. The cavalry will eventually be replaced with local units when I have the appropriate type of figure.

Have fun working out where the various Colonel's come from (all are from radio, TV or novels)

I have reserved Sir Bruce Forsyth and SirWilliam Connolly for the Scottish brigades when they materialise. 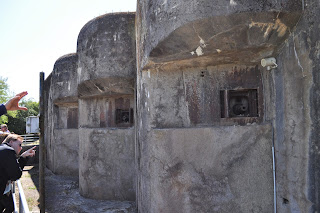 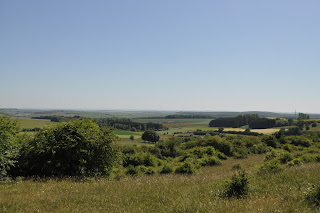 To end with, a couple of photos from a recent trip to the Maginot line.   One of the gun embrasures and the field of view from the observation point (probably wouldn't have been so covered in vegetation when in use)
Posted by joppy at 13:21 1 comment: