Following my last post showing my new highlanders I was delighted to see a note from the great A.W.Kinch asking for advice on painting tartans. The following is the system I followed since finding it in the Toy Soldier and Model Figure magazine, issue 7 (Aug/Sept '96), and was the first of a series of articles by Martin Tabony, who produced many 54mm figures for a lot of ranges at that time. Note that these illustrations are for the 'Government Sett' and while others varied in colour scheme the basics are the same. 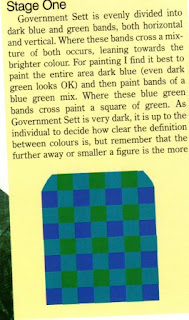 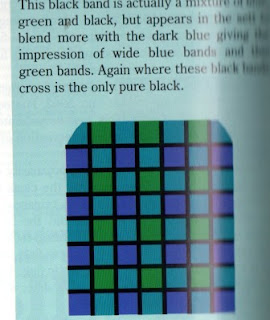 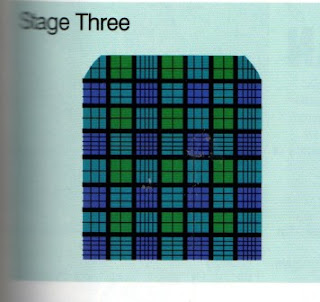 It is possible to get away with just showing one black line through each stripe, unless you have a VERY steady hand and extra fine brush.

The following picture is from an old catalogue of  the 'All The Queen's Men' range by Derek Cross (recently retired, though the range now taken over and continuing). I've only shown the one page, as the catalogue has details of most tartans used by British regiments. Anyone wanting specifics has only to drop me a line and I can e.mail the appropriate page. 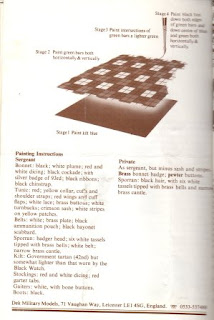 Finally, a picture of three figures I painted as trials some 20 years ago, when I had a steadier hand. These show three different tartans, with the Black Watch being on the left. I hope the clarity is sufficient, but I took the photo in a hurry about half an hour ago as a lst minute addition. 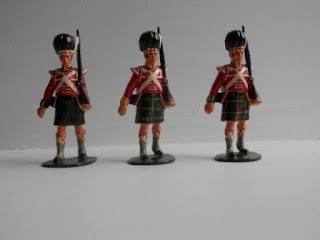 I must admit that when painting smaller figures I was far more stylistic and didn't follow the detail so avidly. If it looked right I was happy. 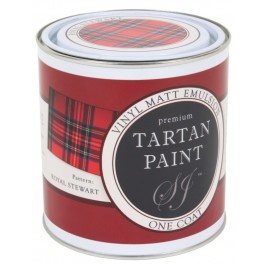 As I have been designated 'family carpenter' for a while, with a number of projects requested by various members of the clan, this is the last batch of troops for a couple of weeks or so. They are supposed to be the 10th (Scottish) Battalion of The King's (Liverpool) Regiment, though there are one or two minor (?) discrepancies. 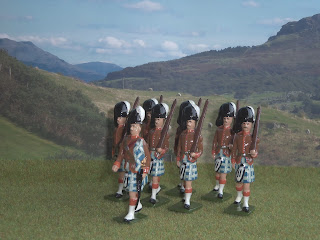 The unit was formed in 1900, and though dressed as Highlanders they wore the glengarry, not the bonnet; but I only had these figures about. The kilt and plaid were not one of the normal government issue type, but were the Forbes tartan. Unfortunately it has ended up paler than I would have liked. The other thing is that the sporran should be grey, not white. Truth is, by this time I was glad to see the back of them, so didn't change it for the second time! 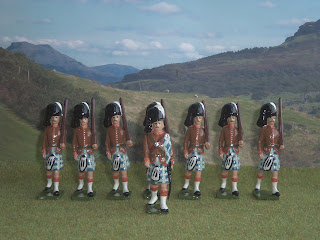 Thank goodness there are not too many volunteer regiments that wear tartan, though I still have a few to look forward to in the future.

You may notice that I've added a page (see the link on the right) that contains some VERY simple rules, which I used to use with my son many years ago when he would 'want to play soldiers'. Sadly he soon grew out of that. These rules were designed to give a fast, easy game, and as we used the dining table were usually over in an hour or so. No finesse, just advance, kill the enemy, win.

Perhaps I should try them out again, for nostalgia's sake, as a solo effort.

I've not done too well on the painting side this week, so no picture. I'm doing a unit of Highlanders and I hate painting tartans! I've left out some of the finer lines, and just discovered I've painted the sporrans the wrong colour. I assumed that they were black with white tassels, but looking at the illustration I'm using I find they are white with black tassels. So they need re-doing.

Also I lost two days, as I had to take an unscheduled trip up to Northamptonshire. Hence lack of progress.

In the meantime I've been tracking down suppliers of castings for my own personal favourite figure, readily adaptable for this era, the Victorian Fort Henry Guard (see previous posts). My original stock of Replica Models recasts are now all gone, and I need to find a replacement. Fortunately I have found a few makers that can supply. The new style Britains figure, unfortunately, is not a patch on their original. The modern version has no strapping detail moulded on, just painted in a very thin line, so is relatively useless for my purposes. 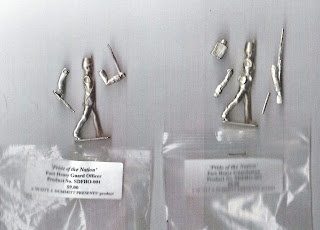 The Canadian firm of Scott J Dummitt have a number of painted sets, but they also have a pair of marching figures. When I contacted the owners they only had a couple of privates in stock, but very kindly sent their caster out into his cold shed to provide me with enough figures for another unit. These will go on the bottom of the painting list. They give a different pose to add variety.

Another supplier, who I still await a reply from, is The British Toy Soldier Company, though they only seem to provide a private. This figure, I believe, was originally offered as a subscription 'gift' for the Toy Soldier and Model Figure magazine.

In the meantime I am in consultation with Giles Brown of Dorset Soldiers about producing a mould from some of my figures, at least then I can have a steady source of castings to play with.

Finally, and here I would like some assistance from any Canadian followers, there was a firm called'Queen Victoria's Enterprises' that had the figure in various guises. Produced were marching, firing, corps of drums, colour party, pioneer and mascot. Unfortunately one of the partners, Colin Cunningham of Toronto, passed away in April 2015, and I can't find trace of his co-partner, Jim Shakley, oe whether the company is still operating. Can anybody help track them down?

Anyone living in the UK over the last week or so will know by now that the new film 'Dad's Army' is being released tomorrow, February 4th. It has been mentioned on numerous TV chat and magazine shows with the stars being interviewed collectively or singly until I bet they are heartily sick of answering the same questions. 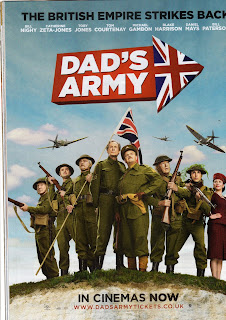 This film is a revival of the old BBC series with a completely new cast (it had to be, most of the originals are no more) and has met with mixed reception from aficiondos of the series, which appears regularly on lists of Britain's best TV shows, and can be seen on a variety of channels at regular intervals. Many of the stock phrases have come into daily use (don't panic, stupid boy, they don't like it up 'em) and bring back cosy memories where we almost think of the cast as old friends.

The original Dads Army, as we all know, was formed as Local Defence Volunteers (later The Home Guard) early in the war, and was formed of men who were either too old to join the regular forces, were in reserved occupations and therefore exempt, or youngsters waiting for call up. Their main duties were the guarding of important installations, allowing regulars to be deployed more effectively, or as a secondary defence force in the event of an invasion. They were to slow down the enemy advance, though this was expected to be only for a matter of hours, while the regular troops deployed.

Note, these are not the same troops as the Auxiliary Units that were set up and intended to act as local resistance groups in the aftermath of an invasion. These groups were secret even up to the early 1960s, and many family members didn't know their fathers, brothers, husbands, were members until then!

Anyway, here, from my cabinet of curiosities, is my take on this brave band of old boys. A set of 54mm  kits available back in the 1980s, and painted by me when I could do a better job. I hope you recognise the various personalities. 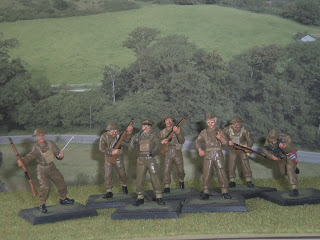 Wikipedia has a long article on the Home Guard, which brings out one or two things I didn't know. Worth a read.
Posted by joppy at 03:10 8 comments: