Book(let) of the Month

While very little is happening on the figure front (just finishing of Mr Llanfanihangel Penbeddw, President of the Republic of Wales) I thought I'd drop a picture and small description of this small booklet from my shelves. 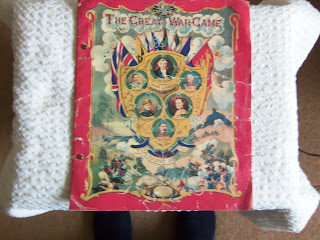 The Great War Game, published by Britain's to support their range of soldiers. According to James Opie's book 'The Great Book of Britain's' it was put out in 1909, which I believe predates 'Little Wars' by a few years. My copy is a reprint put out in the early 1990s.

The cover is as illustrated, with portraits of 'warlords past and present' showing Wellington, Napoleon, Lord Roberts, Lord Kitchener' Von Moltke and the Kaiser. An interesting selection. The title page suggests that it is for 'boys of all ages from 5 to 75 years, the 16 pages of close type include chapters on the Battlefield, the Army, Moving of troops, Time, Ammunition and methods of firing, Killed and wounded, Recruits, Prisoners, Tactics and War correspondents, ending with a description of a battle between the French (Napoleon) and the Russians (Czar), showing that Napoleonic warfare was to the forefront even then even if the troops were of the wrong era.

I was interested in the army make-up, where one corps is made up of two infantry and one cavalry brigades, each brigade of two or three regiments, each regiment of three or four companies (infantry) or three or four squadrons (cavalry) all of ten to twenty men each. To my maths this makes a regiment of between 30 to 80 men, a lot to move around though trays of 12" by 6" are suggested. Although this is impractical today at 54mm it might be feasible in the smaller scales?

My sister and I have nearly sorted my late mother's estate, normal service should be resumed within a couple of months.