One of the benefits of doing voluntary work at a charity warehouse is the amazing variety of 'stuff' that comes in from all kinds of people. We get all kinds of board games, and these must all be checked for missing pieces, if incomplete, the game is recycled. I try to make sure useful pieces come my way, but this isn't often. Recently I managed to pick up a complete IKEA slatted blind which will make many bases for my small scale cavalry, but a couple of weeks ago I turned up to be told that a donation of games material had arrived and would I look at it.

It looked as though a retailer had had a clear out, among about 30 large boxes were many containing brand new jigsaws (no need to count the pieces) and expensive chess/mah jong/ backgammon sets (one of which retailed at £120) and childrens board games (Ludo/snakes and ladders/mousetrap/etc.), but also many games and books relating to the Dungeons and Dragons ethos, Lord of the Rings, Star Wars, and so forth. As well as two boxes full of Fantasy miniatures from the likes of Reaper. I just wish I had the time to sort through them, but persuaded the manager that e-bay was the place for them. They will be appearing over the next few weeks, I assume. Already some of the books have gone on, and I believe enquiries have come from as far as the other side of the Ocean.

Among the debris were three large boxes of miscellaneous clutter. Games pieces, poker chips, and many, many dice (die?). 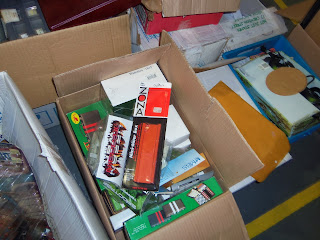 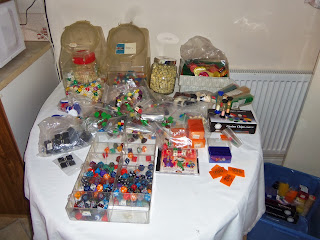 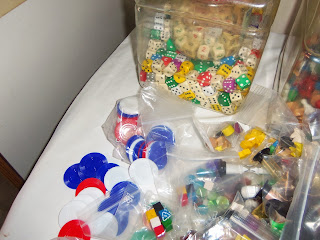 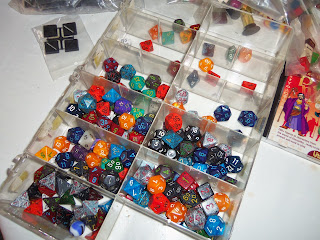 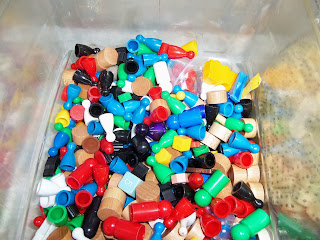 These photos show only about half of the stuff, as there's another box full. I rescued these, having paid a miserly £10, which included a complete counter display rack of model paints and brushes!! rather than have them disappear into landfill.

The problem is, there are far too many bits for me to ever find a use for, so how do I dispose of them? Current possibilities are -
a) put them into 'job lots' and sell them on the hospice's behalf through e-bay.
b) offer them to the local wargames clubs.

Can anyone suggest something else that is fairly straitforward, relatively easy, and won't cost a packet. I pass the problem to your collective minds in the surety that you'll come up with something.

ps. I'm keepin the paints to myself, especially now the UK mail services are restricting the postage on these.
Posted by joppy at 04:07 5 comments:

What am I Reading?

Because of the weather, a little part-time work, and Mrs.J's redundancy I have been rather sidetracked over the last few weeks, but have noticed a few bloggers filling out details of a recent book survey. My answers are apt to change on a day-to-day basis, so I have resisted temptation to answer in full, but I have 10 bookcases of various sizes scattered about the house, the 27th book from the left in the one on the landing is, strangely enough, a copy of the Bible (we appear to have three in the house), and the author I have read most of is Terry Pratchett (probably because he has been so productive).
The item I'm reading at the moment, having just finished Conn Iggulden's 'Stormbringer' - and I look forward to the reast of the series - is this - 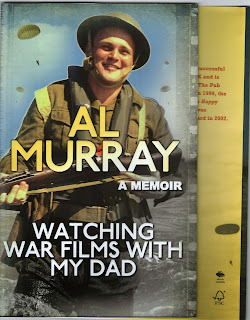 Non UK residents may not know the name, but Al Murray is a well-known and well-educated comedian with an alter-ego as a pub landlord. I find him hilarious. He has written the above book which I dipped into in the local bookshop, and I think it could be something along the lines of 'Achtung Schweinhund' for interest, though covering war films and their accurate portrayal of historical events.

The blurb - in full - says "Have you ever watched a film with someone who, at the most dramatic scene, argues that the plane on screen hasn't been invented yet? Or that the tank rumbling towards the hero at the end of the film is the wrong tank altogether?
Al Murray is that someone. Try as he might, he can't help himself.

ps - the little collection of 'Monty' pictures is something totally unexpected.


Something else I picked up at the library today (if you don't use it, you lose it) was this 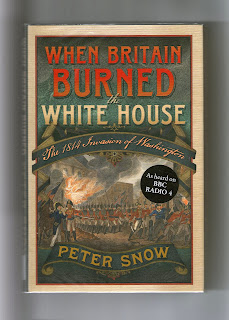 It's an area of history I'm not too familiar with. Yes, I knew we'd burnt the White House and I read C.S.Forester's book on the naval war many years ago, but apart from that, nothing. I look forward to reading this book over the next couple of weeks.

According to the Daily Telegraph review section last saturday, publishers are releasing around 1000 books on WW1 over the next twelvemonth, to cover the anniversary of the beginning of WW1. In my mind we are 'celebrating' four years too early, as it should be the end of the war we look back on, rather than the start. Just my opinion.