A New Project (or two)

Not being one who can concentrate on one project at a time, preferring to flit like a butterfly from one to another, I'm currently in the process of conducting a battle over the ether with another gamer and the considerable help of an umpire. My first battle for many years. In the initial stages of planning I mentioned my old alter-ego from those early days, one Hagen Von Tronek, and this gentleman was conscripted to command my forces.

Here is a picture of the old chap in his later years, as High Constable (Chief of the Armed Forces) of the Grand Duchy of Humperstein. More details will be released later this week. 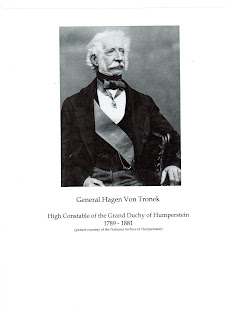 This led me to reconsider bringing forward my other imagi-nation states and I've spent a bit of time net surfing and studying figure ranges, and my decision is that I shall have a 30mm 18th century group, using the unit organisation from 'Charge' and various figures from Minden, Willie, Stadden, etc., and another 19th century group in 28mm using figures from the Foundry Crimean stable and similar, using the more modern 'Black Powder' information.

Needless to say, these plans are still in the notebook stage and unlikely to reach fruition for some time, I still have to finish off my first 'Heptarchy' force. The objective here is to refight Wells' 'Hooks Farm' outside sometime in the summer.
Posted by joppy at 07:56 2 comments: 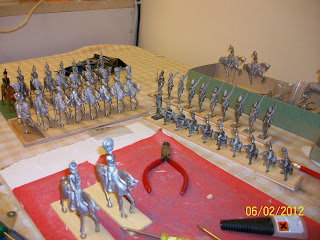 The snow over the weekend was a slight blessing. I wasn't able to do the odd jobs I had planned for the garden, and it was far too cold in the shed, even with the heater and extra layers of clothing, so I had to find something to do indoors. I managed to finish putting together enough figure castings to complete the small force I outlined earlier in the blog. I still have the second unit of Dragoons to finish off, but that won't take long. I'm not sure when they'll be painted though, as Julia and I, along with two other couples, are taking our caravans down the Loire Valley at the beginning of March, so we have all the route planning and logistics to sort out.

Some of the units will be part of my Heptarchy East Anglian army, as the uniforms will be drawn from assorted Rifle Volunteer units of the area, The others will be replaced by local units eventually.

The other ongoing project at the moment is a battle being fought by e-mail between Alan Gruber and myself, with Brian Garrick umpiring, using the Big Wars rules. No doubt a report will appear in due time.
Posted by joppy at 09:21 2 comments: