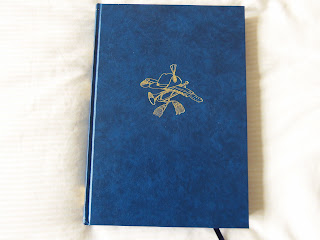 I have just received my copy of the new Yeomanry Uniform book from D.P.& G., the last in a four volume set. This one from 1901 to 1914. A review has been sent to the Funny Little Wars yahoo group, but here are a few photos to whet the appetite. 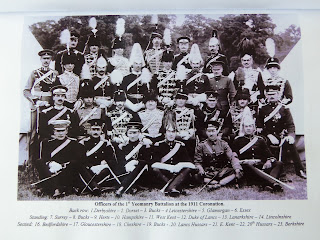 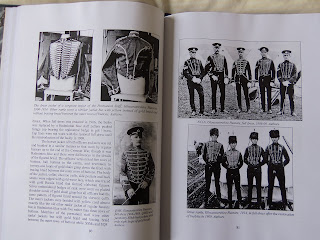 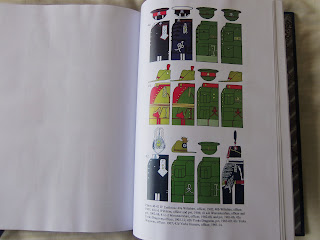 Plenty of scope for new units here.
Posted by joppy at 04:48 3 comments:

As things are a bit quiet at the moment on the troops painting front while I have other concerns I thought I'd put up a picture of an ongoing project. This is a small coast defence ironclad based on HMS Glatton. She is about 4inches long and has a single forward turret. I took the drawing from Oscar Parkes "British Battleships" just tracing it straight off the page. There's just a little more detailing to be done and a Victorian paint job. My intention is to have half a dozen or so of these little vessels for use on the grass with very simple rules, which I'm working on now and again. Once she's finished it may be the turn of HMS Hotspur, fixed turret but moveable gun.


One now for 'Chasseur' - I've managed, after a long search, to get hold of a copy of 'The Black Battlefleet' by Admiral Ballard. A detailed look at all the Royal Navies capital ships from Warrior to the 'Alexandra' of the 1880s. Originally published as a series of articles in The Mariners Mirror in the 1920's, my edition is from1980.

As well as giving details and many photos of the ships, the book has pictures of life aboard, and also includes large sail plans of some of the ships, including sizes of masts and yards. Also included are tables of armament and armour, and machinery data. The latter includes the avarage speed of the ship so any gamer could build any differences into his rules.
It was quite an expense, but will be worth every penny eventually. Strangely enough my copy came from Canada.
﻿
Posted by joppy at 01:56 4 comments:

Real life has been getting in the way of hobbies this month, and July is looking to be equaly as hectic, my elderly mother (94years and going strong) was rushed to hospital a couple of weeks ago after a fall. This is the second time in six weeks. As she is still there and the docs can't seem to find out what the problem is - latest opinion seems to be a thyroid problem - she's likely to be there a while. This means a round trip to visit of 200 miles on a regular basis, so other things get put on hold.

In the meantime here are pictures of my current ongoing project. I was slightly disatisfied with the fact that current figures don't seem to provide quite the style of troops I wanted for my volunteer units, so I've started to commission a small range for myself. Here are the greens for the first. 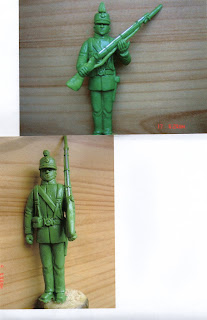 They utilise the same body, but I have currently two heads, one with a pom-pom and one with a plume, and arms for advance arms or slope arms. The plan is to have a further selection of heads (fusilier busby and rifles cap for example) and more arm positions, plus an officer figure to complete a unit . With judicious mix'n'match these will give me a considerable number of different figures (I did calculate that, using the various parts of the pack, water bottle and blanket roll this one body would give me 16 different figures ) Perhaps later another body pose perhaps walking. Then I can replace my langley armies with these over time. The greens have gone to the mould maker at the moment.