A couple of photos

I see Captain Widdrington, our roving Military Observer, has been getting some action, in more than one sense of the word. Perhaps not everything will be going in his official reports? His latest exploits in Svennhasselstein can be viewed over at  the Megablitz and others blog, and on the Funny Little Wars forum, courtesy of Tim. Gow. Thank you. Who knows where he'll turn up next? he certainly hasn't told his office. 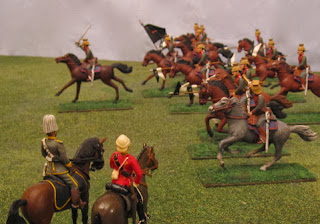 Next, a request. Over the past few months I've been trawling through my late mother's cache of family photos. Most are fairly recent (i.e. post war) but among some of the older ones is this. 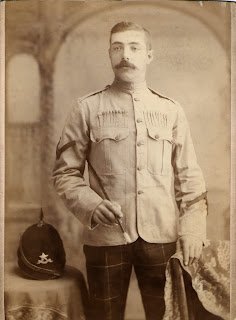 Taken, according to the back, by G.W.Lawrie & Co, of Lucknow, Naini Tal, Bareilly and Ranikhet.
Obviously a family member, but no-one seems to know him. Can anyone help identify the uniform? I don't know if it shows up, but the trousers seem to have 'tartan' style lines on them. I have a swagger stick with a Staffordshires crest on it, which could be the one in the photo, but I can't place the badge.
Any assistance would be appreciated.
(ps, family scuttlebutt has a vaguely remembered 'Uncle Arthur', who, on his demise, had three women claim a widows pension!! I like to think this is him, using his various postings - "I have to go out to Inja for a couple of years, me dear. See you then"
Posted by joppy at 08:53 4 comments: