MrsJ  recently expressed a desire to get away for a weekend in the caravan, so I obliged by booking a couple of nights at a site in Bearsted, just of the M20 near Maidstone. I did tell her that I had an ulterior motive, and that was a visit to Chatham Historic Dockyard, some 20 minutes away. She thought it would be a short visit leaving time to go somewhere else!

We arrived about 10.15 to a nearly empty carpark, paid our fees (one and a cheap oldie) and spent the next 5 hours there. As we left the entrance building we saw the three historic ships that can be roamed around. HMS Gannett, the epitomy of Victorian gun-boat diplomacy currently being restored (I hope they fit replica engines, the boiler room looks so empty) and I took a few photos of the interior. 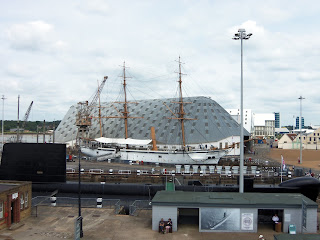 photo taken from bridge of HMS Cavalier
booked a timeslot for a tour of HMS Ocelot, the Cold War submarine (I know submariners were volunteers, I didn't realise they had to slightly barmy too). Various little snippets from the guide - crew only allowed one change of clothing, often wore same clothes all week then turned underwear inside out for a second week, 21 crew members living/sleeping/eating in a room not much larger than my garage, - I realise that those old films don't exaggerate the crowded conditions at all.
An audio tour of the 1940s/50s destroyer HMS Cavalier. we covered the whole ship from deck to bridge. Again, surprising how cramped everything was. 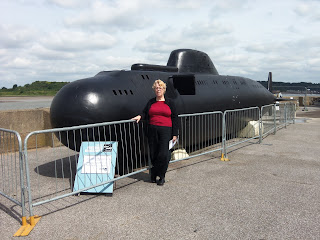 Mrs J to give a sense of scale. According to my memory of the information plaque (nothing to write with) this is a scale model of a Kilo class submarine, and was one of those used in the Bond film "Thunderball". We also saw a model of HMS Victory used in the film "That Hamilton Woman", again larger than expected.

A tour of the Ropery, still producing rope commercially but under private enterprise, was a joy. Our lady guide became a Victorian ropewalk worker and went through the whole process, ending up with assorted group members helping make a rope. It must have been extremely noisy when going flat out, and no Health and Safety either.

The various "show sheds" of models and paintings didn't allow photography, and though there were only a few of the models on display from the NMMs collection, it was possible to look through a window into an environmentally controlled  storeroom and see others. I believe that if you want to view a particular model this can be arranged In advance.

All in all, an enjoyable day, and MrsJ says that she wasn't too bored by it. I'll have to go somewhere feminine now, to repay her.
Posted by joppy at 12:04 No comments:

Book of the Month (really a DVD)

Things are quiet chez Joppy at the moment, holidays and outdoor projects taking precedence. However, I have just taken delivery of a recent DVD issue which may be of interest to those of you with FLW interests. 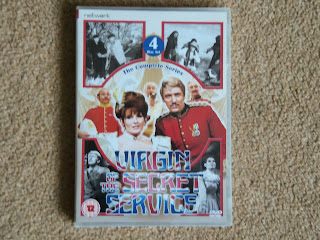 Virgin of the Secret Service
Some of you of a certain age and with long memories may remember this series from the 1960s, but here is a reminder. The box holds 4 discs containing the complete series of 13 episodes. I have only watched the first so far so the comments are based on that.

The series is set in the early 1900s (pictures of Edward V11 on barrack walls) in the early days of the Secret Service under the guidance of Colonel Shaw-Camberley, and Captain Robert Virgin (Clinton Greyn) is the pseudonymous hero, aided by his batman Doublett (John Cater) and an attractive lady 'journalist/spy' Mrs Cortez (Veronica Strong). Their antagonist throughout the series is the wily free-lance villain Karl Von Brauner (Alexander Dore).Their adventures take them from the North West Frontier to Russia, Brazil, India, Egypt and other places, safeguarding frontiers, protecting secrets and thwarting assasinations.

The episodes are in black and white, though there are colour photos on the jacket, so perhaps the later episodes are colour. Don't expect modern 'Spooks' style programming. The photography is decidedly dodgy and the acting is very OTT and 'hammy', Carry on up the Khyber is a masterpiece in comparison. The dialogue is long-winded and static appearing to be very much tongue-in-cheek with fighting sequences being very staged. I think the writers saw this as a comic show rather than drama.

Having said all that, I think all aficiondos of FLW would enjoy the series, and it could produce some scenarios (exploding sweetmeats delivered to the British commanding officer) or character possibilities (the colonel who thought a game of polo more important than the safety of the frontier).