There But Not There - The Ten-inch Tommy

Another month gone with little happening, a general apathy seems to have struck me, probably because of the weather and time of year. Still, I can write about something that may not have come to your attention.

There is a new charity on the block. It is called "Remembered" and is a forces charity taking advantage of the centenary of the 1918 Armistice and end of the First World War, a date now used to commemorate the fallen of all subsequent wars as well. The aims are to help keep the memory of those lost to duty in the minds of new generations, who may not have the immediate family connection to those who served in WW1 and WW2 that some of us have. My grandfathers and father served in these conflicts, and I know the names of various relatives who died in them, but my grandchildren do not have this link. The charity also helps current sufferers of forces related disabilities. 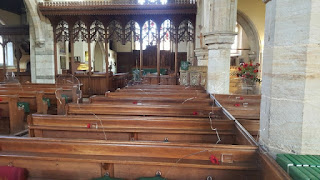 One way they are commemorating 1918 is by using 'ghost' soldiers. One such installation is at Penshurst, (photo above, taken from the Rochester Arts Mission website). Here they have taken each name from the village war memorial and placed a Perspex silhouette on a church seat. It is a reminder that that person is not just a name on a plaque, but lived in the village, worked there, went to church there, etc. , and makes the viewer think more deeply of the 51 people (in Penshurst) who went off to war and never came back. Further installations are in planning.

Another way of bringing the anniversary to the attention is similar to the 'poppy' field at the Tower of London in 1914. This time there will be life-size silhouettes of a Tommy situated at strategic places throughout the country. 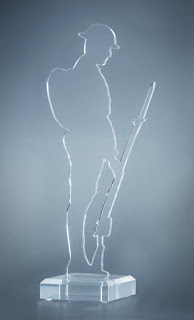 ﻿
Similar to the poppies, it will be possible to buy your own Tommy. Not the full size figure but a small 10 inch version. It is also possible to get a plaque with it bearing a name that you may wish the figure to represent. These cost £29.99 plus postage, and can be found on the website at- Remembered. There but not there, under the heading of Buy Your Tommy.
﻿ 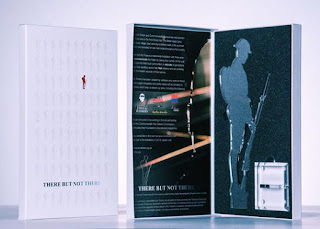 A project worth supporting.
Posted by joppy at 00:32 6 comments: 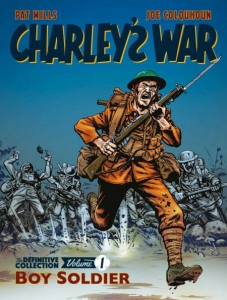 Having nothing interesting to report, I thought I'd keep the entries going by bringing this to your attention. Because I once purchased a few Dr Who miniatures from them Forbidden Planet send me regular weekly updates on new merchandise. Among this weeks collection of Marvel Superhero comic books and others I noticed this book.

For those of less mature years, and possibly non UK viewers, I should tell you that this is a comic strip that originally appeared in the weekly comic 'Battle'' starting in 1979 with young Charley Bourne lying about his age to enlist in the army, and works it way fairly chronologically to the British intervention in Russia after the armistice.

I have the original book versions, all ten volumes, and re-read them fairly regularly, even though they are not necessarily easy reading. The strips are sometimes heavy going, as the stories do not glorify the war in any way. They seem to show the mud, blood and ferocity of the Western Front in all its horror. They also show the stupidity and arrogance of officers, the pressures of war, with soldiers suffering mentally and physically. There are even nods to real figures. In one strip there is a recognisable figure in the foreground while in the background are a couple of officers saying "...private Adolf Hitler is the best runner in the unit...". During one of the stories we digress to following one of Charley's brothers in a naval battle.

The series ends in 1933, when Charley is unemployed, like many others at the time. He is walking down the street having just met his old sergeant ruminating on the futility of the War and that politicians must have learned their lesson, while on the corner a newsvendor is shouting that Hitler has just been elected German Chancellor.

Ah well, now back to the model railway track laying.
Posted by joppy at 10:53 4 comments: