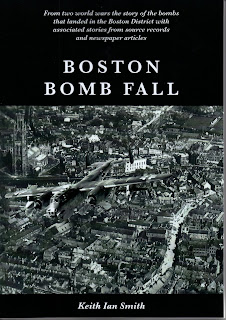 I don't post for ages, then three come along at once, almost like London busses. But I just thought I'd let you know about this new book, published on the 16th and launched at the WW2  Home Front Museum in Boston, Lincolnshire.

This book is quite locally specialised, covering, as it does, the various air raids on the town and area through two world wars. Boston was, at the time, a medium sized market town and small port on the east coast. Its only claim to fame being the large parish church of St.Botolph, known as "The Stump" and a connection to the original Pilgrim Fathers. The book came about through the author hearing that a schoolteacher had told a pupil that Boston had not been bombed in the war.

Using newspaper reports..... "a small East Coast town last week..." etc., with county and national archives, the author has produced a detailed account and analysis of the sixty or so raids, along with the types of assorted bombs that fell. He also covers the casualties and damage to the town. (I always wondered why there was a single bungalow in the middle of a terrace of houses in the next street to us). The town actually got of very lightly. Out of a population of about 30,000 there were 21 civilians killed in the area.

Probably not a title of general interest, it gives an overall picture of time and place, worth a read if you are interested in the air war or civil defense.

There's also a picture of my mum in her AFS (Auxilliary Fire Service) get up, so it's personal. 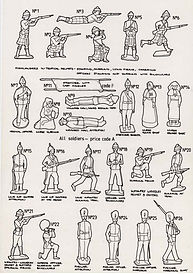 Way back in May of this year I mentioned the passing of one Pat Campbell, one time supplier of solid recast Britains (and others) 54mm toy soldiers. It came to my attention yesterday, via the Funny Little Wars Yahoo forum, that the range has been taken on and reintroduced under the name of Replica Model Soldiers.
There is a website www.replicametalsoldiers.co.uk which is relatively new and (I found) a little awkward to travel round, with many photos still to appear. Andrew, the new proprietor, intends to get the whole range on the go, along with a spares section. Both unpainted castings and painted sets will be available.
Worth investigation by those of us who have units for 54mm gaming, and to encourage the new owner to persevere. Up top the picture is a page of the pdf catalogue that can be uplifted from the website.﻿

Compliments of the Season

I seem to have become very lax in my postings of late. I put it down to having been volunteered by various of my children to baby sit assorted granddaughters throughout the week. It appears that I only have the weekends completely free of constraints, though MrsJ takes full advantage of my availability during that period for various domestic duties. Don't get me wrong, I love having the girls, but too much of a good thing wears me out. They are at the age where they need constant supervision, so nothing else gets done. Next year will see a renegotiation of terms! 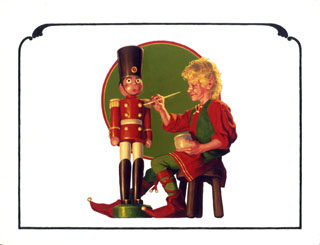 I'm taking the opportunity to wish you all a very merry Christmas, with lots of goodies to keep you going over the next twelve months, and a happy and prosperous New Year.

I have already received my obligatory present of slippers and hankies, no doubt the socks and ties will arrive in time. This in spite of my presenting anyone who asked what I wanted for Christmas with a detailed list of hobby related items. Right down to code numbers or ISBNs where appropriate.

I'm currently working on my resolutions for 2019, which will include making time to get back to my painting table. I also have a couple of model railways started, for which I hope to start a separate blog, and there are a number of model ships on the to do list. All I need is the time!

Anyway, I look forward to reading how you are all doing over the next year, please keep the stories coming. I do keep up, even if I can't seem to get all my comments published I am taking notice.