It is MrsJ's fault really, she suggested it! One of the projects I'd planned for this year was the building of a sectional surface to fit over our flap-top dining table, giving me a square gaming table. Recent events, beginning with the collapse of the sofabed in the spare room and ending with our recent caravan trip to France, led her to suggest that we a) bought a couple of camp beds rather than a new put-u-up, and b) we needed a larger folding table for our awning. 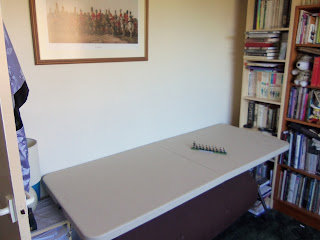 This is the first fruits. Opened, as here, it is 2'6" x 6, and you can see a unit of 54mm rifle volunteers sitting on it'. What MrsJ doesn't know is that I have a second one on order. This will give me a beautiful table that fits the room with space to move. Pity about the gap in the middle, but a cloth should hide that.

Second, I promised myself that I would stick to my three eras and projects. No willpower, you see. It was the sight of the Toytown tables in the photos of Triples (various blogs) that did it. I sent an order off to Eureka. Eventually the land of Blytonia will have two small armies, Army Red and Army Blue, based at Fort Not and Fort So respectively. but that is fo9r the coming winter. No more for now.

While I was rooting round the shed this week I came across an old margarine tub full of bits and pieces, amongst these were some old GW dwarf miners, a few 54mm Brtains railway figure recasts, some GZG 'steampunk' figures (now I believe part of the Eureka line, and those shown below (forgive poor photo) 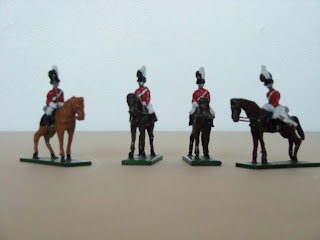 I think they are supposed to be Waterloo Life Guards, but three seem to have lost their swords, and the paint job is atrocious, possibly never finished. Does anyone recognise them or can suggest a good home.
Finally, just to show the problems I create for myself, here is a picture of the worktop side of my shed showing the chaos created by the various projects currently on the go (at least 5 by my count). 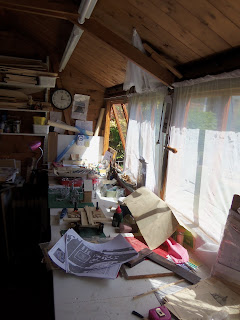 I've dug out a suitable figure from my collection. One that I know isn't around too much. He is a constable of the RCMP in the late 1800s, mastered for me as a kit by Keith Over of Whittlesey Miniatures a long time ago when I 'did' a toy soldier range. I think I only sold a couple at the time, though I still have a few kits left which I hope to use eventually. I see that I painted this one back in 2003.
I hope to get a note up on the FLW forum as well, so that interested parties can put their two penn'orth into the equation. 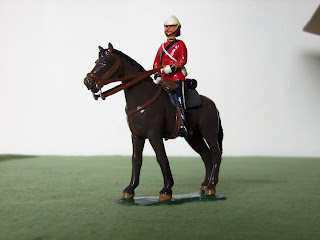 This is Captain Sir William Widdrington of Her Majesty's Observer Corps, on his mount 'Trumper' ( he really should be kept out of the brussel-sprout fields). His passport is ready, paperwork produced and suitable transport prepared. Soon he will be on his way to his first posting (pun intended). I hope he will have a wide and varied journey. It will be interesting to see where his travels take  him.

Just a thought I throw out for consideration and response.

One of my other hobbies is railway modelling (not that I get much done) and one of the groups I follow have been sending a wagon round, photographing it on the various layouts it visits.

I wondered if there would be any interest in my sending out a figure (54mm, Victorian) to act as Military Observer at various sites occupied in Funny Little Wars style operations. If I were to send him to the first, he could be photographed in some situation and passed on to a site of visitee's choosing, and so on, eventually returning to me. His progress could be followed through the various blogs, and I could keep a diary running as to where he is.

Well, we're back from our 10 day sojourn around France. We thought our convoy of three caravans along the French roads was bad enough (try keeping station when your tail-end Charlie and get caught at every red light going!) but one site we stayed at had 8 motorhomes running a 'Doggy Tour of France' - I kid you not, they had a sign to say so. 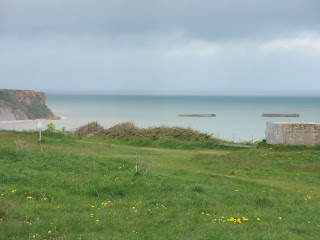 Anyway, apart from shopping, (how can you visit supermarkets three days out of four?) I managed to squeeze in one or two of the D-Day sites, Juno Beach, Arromanches and Mulberry Harbour, and Pegasus Bridge. Will have to go back - alone - soon to cover the rest. We had a trip to Caen, but that was more shopping. Even MrsJ was a bit fed up with it by then. I did get a walk round the outside of the castle. 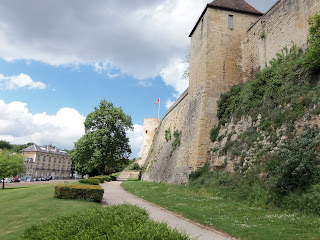 I had hoped to do some painting, even made a gadget for it, but the rest of the party were socialisers full time, so I only managed about an hour all told, before they rose in the mornings. I now have a batch of half painted figures to complete. 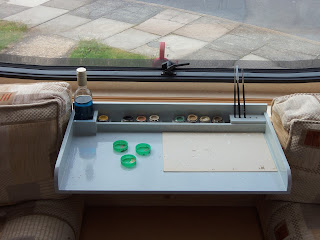 This sits at the front of the van on the small flap between the seating. Good light but bad sitting position. When travelling it goes on the floor at the front, when not in use it sits on the bed. It will be coming out again soon.

When we got back our daughter phoned to say that while we were away she'd got engaged. Long time boyfriend, so no problem.

MrsJ and I, along with some friends, are disappearing on Monday for 10 days in Northern France. The laptop is going with us, but contact depends of wi-fi operation and time available. In the meantime chez Joppy is in the care of our daughter and the beast of Sudbury! 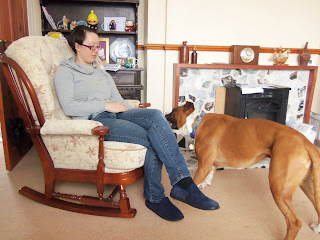 This pony is only a pup, with but two thoughts, "play" and "slobber", and his tail is lethal to anything at coffee table height. Daft as a brush, and you need to wash your hands on a regular basis, as he drools over everything and everyone..

I originally promised three eras of figures; the 54mm turn of the 19th century, the 25/28mm early 19th century, and a 30mm 18th century. The first two of these are up and running (albeit slowly) and I tried to integrate the third as a separate part of my Grand Duchy of Humperstein blog, but had quite a problem getting posts into the right place. So I've started up a third blog to cover it. This can now be found at  duchyofhumpersteinintheageoflace.blogspot. Some of the posts are transposed, with slight amendment, from my other two blogs, to keep things complete. Feel free to take a look, comment, follow if you like.
Posted by joppy at 11:11 No comments: