I thought that, with the wedding over, I could get down to some action in Humperstein, but things conspire against me.

A year or so ago my son began the 'restoration' of a 60 year old pond yacht built by my father and languishing for years in my nephew's loft until he decided to dispose of it. Unfortunately, once his nibs had reduced the boat to its constituent parts (photo) he lost interest. I promised to complete the job, and rashly mentioned Xmas!! Hopefully he won't remember that I didn't specify which one. 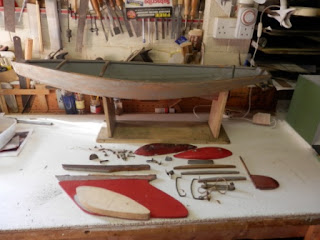 I'm also in the process of building a model railway (7mm=1ft, 16.5mm gauge) in half of the shed and want to take as much advantage of the reasonable weather we are having to get some track laid 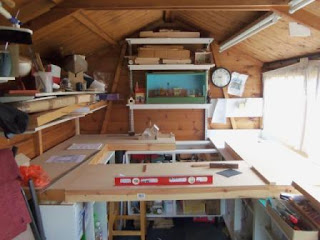 And in the evenings I have continued the rebasing of my Humperstein infantry, I've nearly completed all the current units, with only a couple to go. I had intended to use a couple of days next week, when MrsJ goes away overnight for a works meeting, to use the dining room table for a first battle in the new (old) style, but am now informed that my sister in law who was been given a BEM in the honours list, gets her gong on Sunday the 8th and we are invited to watch, so that is half the week away from home.

The good news is that, when I bought my paper from WHSmiths a couple of days ago I was given a discount voucher, which I immediately spent to get a couple of books cheaper that priced. 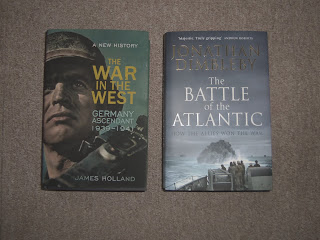 These are both quite hefty volumes, with 'The War in the West' being volume one of a new history. These will be my main bedtime reading for a few months.