Some of the old stuff 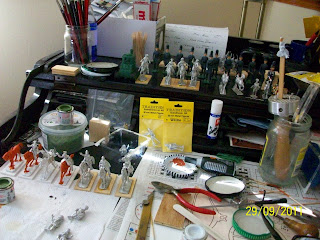 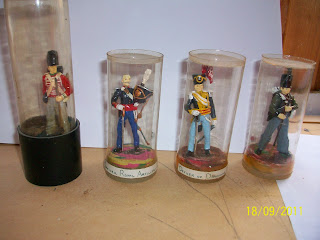 some very early conversions, all based on the same Britains ACW figure 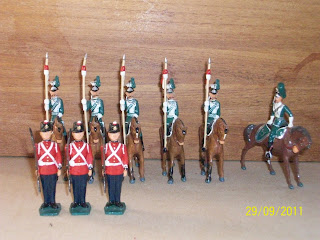 Langley lancers painted as Lincolnshire Yeomanry and unknown castings of Fort Henry Guard
Hopefully, if this works, you should see some pictures of some of my old figures. I obviously need to work on my photography skills.
Posted by joppy at 01:21 2 comments:

I am due to semi-retire at the end of next March and my wife tells me that I need something to take up my time. Over the years I have dabbled in various types of modelmaking, whether it be railways (where I degenerated to narrow gauge to 7mm scale on 16.5mm track) or boats (I currently have a pond yacht awaiting restoration and a 1.72 scale wooden static Flower Class Corvette that has been ongoing since about 1979). Years ago I dabbled in 'toy' soldiers, joining the BMSS (lapsed) and never winning their competitions, and having a small collection of Hinton Hunt Napoleonics (long gone, I'm sorry to say, before the days of internet auctions) and all the usual wargames titles. Although I never actually useed these they are still on my shelves.

Rooting round in the loft recently I was sidetracked by a wooden box that had the lid nailed on. This seemed unusual so I opened it and found an assorted collection of figures. These were military and civilian, a mix of makes, ages and composition, and sight of them rekindled a spark. Also in the box were a few scraps of paper I'd scribbled notes about a fictional set of countries down on.

These countries were of middle European origin, the geography being that of the Counties of the East Midlands (Lincolnshire, Nottinghamshire, Cambridgeshire, Northamptonshire and rutland) and named after TV series or films of the era (Rubovia, Borsovia, Grand Fenwick, etc.), You'll hear more of these later.

I'm now in the process of surfing the net about wargaming (the wife says it's too quiet), finding rules, looking at figure ranges ( ain't there a lot), scales and periods, to find out what it's all about. I've been posing questions on various sites, and will spend some time sorting out my intentions. When these are finalised I'll be back, if not before.

Plea. A Suffolk gamer prepared to help out with a beginner would be welcomed with open arms, though I have discovered over the years that I am not a 'club' person I'll give it a go.

ps - The Blog title. I thought quite hard about this, and find that STEAM, STEEL AND TORPEDOES, while being the title of a book on the early steam navy, also reflects my three areas of interest qite well.
Posted by joppy at 12:04 2 comments: