A very Happy New Year to one and all, I trust you are all recovered from the last week? Did you get what you wanted from the man in the red suit? Most of my family gave me cash donations towards a new table saw, as the old one had blown up (burnt out the motor) a couple of months ago, and I was on the lookout for an expensive replacement.

Resolution for 2016 - not to make resolutions, just a project list over my various spheres of interest. That way I won't be disappointed come December! As a start, I'm halfway through the draft for the second Hobbies wargame article, which I will put up as soon as it's finished.

I was researching pre-dreadnought warships over the holiday period, and came across a site that could be of interest to you all. This is The Old Print Newsletter - www.old-print.com. A site that list over 250,00 items. Old illustrations from such publications as Illustrated London News, The Graphic, etc., and cover many social, military, naval and historic items of interest and inspiration.  I mention it as you may not have found it yet.

Compliments of the Season 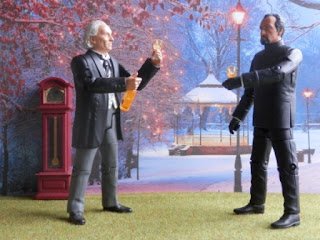 The Doctor knew that Christmas was the time of goodwill to ALL, and thought the best place for his party was Narnia.
Posted by joppy at 00:30 4 comments:

Many people have heard of Terence Cuneo, the artist who was famous for his railway paintings, many of which adorned railway stations around the UK. What fewer people know is that, in every one of his paintings was a little mouse, his trademark, if you will, and many hours have been spent trying to find these creatures in the paintings. About 20 years ago I bought a large illustrated book of his pictures called 'The Mouse and His Master', and discovered that Cuneo didn't just paint trains! He did portraits, landscapes, ceremonial occasions, wildlife and military subjects as well. At the back of this wonderful book is a short segment of whimsical paintings of anthropomorphic mice in assorted situations, and, as it is the season for daftness (among other things) I give you these two examples relevant to our interests. The book is worth searching out from inter-library loan, for the pure browsing pleasure. 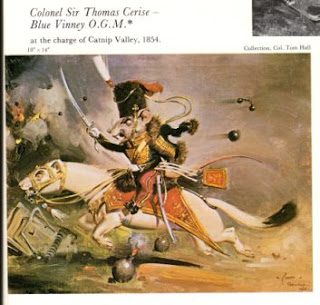 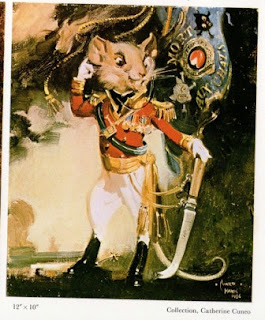 A vintage game for Christmas?

Recently I managed to obtain most of the old Hobbies Weekly magazine, volume 1 (1890s) through to volume 16 (1903) as part of my collection. This magazine, as specified in the title, covered many different hobbies, including stamp and coin collecting, metalwork, photography, taxidermy, gardening, etc., though very little was found on model soldiers. As I was working my way through the various volumes cataloguing the fretwork designs I found two issues that mentioned wargames. As the articles were fairly short I wrote to the current owners of Hobbies Ltd and asked if I could reproduce them. The answer was a yes, "as long as I showed their logo and acknowledged origin"; so here goes. 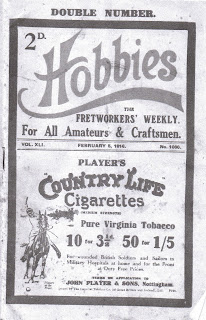 I think that will cover the obligation, and here's the first article.

ATTACKING THE FORT. A WAR GAME.

Next to bravery, the two most important aids to success in war are good marksmanship on the part of the soldiers and skill on the part of the officers in placing the men.
The game of "attacking the fort", though intended especially for our young readers, will also afford amusement to their elders. With the exception of the toy cannon, everything can be of home manufacture.
THE CANNON.
The toy cannon can be bought for fourpence or sixpence. It has a string spring which, when released by a little lever, will throw the missile - a dried pea or a small cylinder of wood - clear across the room with considerable force.
HOW TO MAKE THE SOLDIERS.
The object of the game is to knock down an advancing column of soldiers according to given rules. These soldiers are either of flat wood or paste-board and mounted on small woden pedestals to keep them upright. Fifteen soldiers are required, and these may be bought or else made in the following way:- 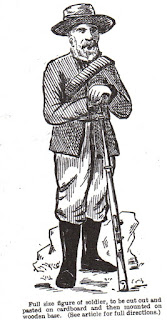 Take fifteen tracings of the soldier here pictured, which serves as a model. Paste the tracings on cardboard and colour them brightly with water colour; after which cut out each figure with strong shears and mount on wooden bases. These bases should be one-quarter inch thick by one inch depth and one and a-half inches in width. Saw with the longest dimension and half way through. Into this crevice put some glue, and then slide in the bottom of the soldier figure.
THE BATTLE GROUND.
The battle ground is a sort of chequer-board, twenty-six inches square. It is to be laid out in a strip of cardboard and divided up into two-inch squares, as per illustration.The alyernate squares are to be in black, and on these, and these only, the soldiers are moved about like chessmen. There should be seven black squares each way - that is, a black square starting at each corner (as A, A-B, B in illustration). The fort wherein the cannon is placed should be marked off as described in the illustration. The mouth of the cannon may be made to describe a circle, but it cannot be moved either forward or backward of its given place. Its exact location is to be determined in the following way: The distance from the mouth of the cannon to the rear rank of the fifteen soldiers must be precisely four feet. 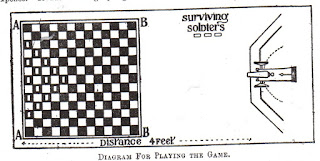 HOW TO PLAY THE GAME.
At the outset of the game the soldiers should occupy the fifteen black squares which are shown with white centres and which form a pyramid. Two persons are supposed to play the game - though it can be turned into a game of solitaire if neccessary - one to shoot the cannon and one to move the soldiers.
one shot from the cannon starts the game, and as many soldiers as lose their balance are removed and counted among the lost. Next the soldiers are allowed to move five moves - that is, to traverse five squares. One soldier may be advanced five squares, or five soldiers one square each. It does not matter how the moves are made so long as it all amounts to no more than five squares advance. To capture the fort three soldiers must succeed in passing the line BB. If a soldier is on the last row of squares, of course one move will carry him over the line, and then he is placed in the space marked "surviving soldiers". When three are thus landed on the safe side the fort is taken, and the person who handled the soldiers wins the game.
The great point to bear in mind is to spread out your men as they advance, so that the least possible damage may be done by the gun; for if two men are close together, one behind the other, it means that they both fall if a shot hits the first one. Work your men one by one up to within four squares of the last row, so that your turn for five moves will carry them over the dead line. If you leave a man within a couple of squares of the end, of course your opponent will do his best to pick him off with the cannon.
You keep on alternating a shot from the cannon and five moves with the soldiers till the fort is captured or held.
It will be found advisable to raise the cannon up by means of a book or small box, so that its shot will hit the soldiers well above the waist; otherwise it is hard to upset the men, even when hit.
The best place to play the game is on the cleared dining-room table, and to prevent the shot from being lost or doing damage a back-stop of some sort should be placed behind the soldiers.
The foregoing rules may be somewhat modified, according as the marksman happens to be skilful or the reverse.
The game is highly entertaining, and particularly because a good deal depends on the scientific manipulation of the men
xxxxxxxxx

That was the article. I can see it in use with the wooden soldiers provided by the blog known as 'Skull and Crown' and using one of those guns sold with toy pirates, that fires ping-pong balls. It could even be adapted for outside use. Following are a couple of illustrations taked from a 1940s Hobbies Annual, showing some alternate soldier styles. 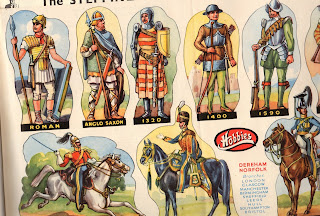 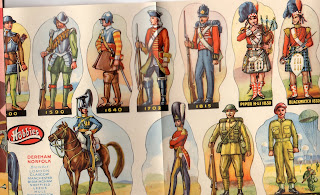 I hope you enjoyed that little foray into the past, and I'll post the second game, which was later in date and more complicated, ready for the new year.