I blame Mr Kinch and his recent blog posts concerning the eyes on toy soldiers! This week I have been spending the evenings catching up with my 54mm Funny Little Wars troops, and preparing a little something for 'taking things forward' (I had a boss who used that as her buzzword). So here's a little update on the current situation.

Originally I had intended 4 cavalry units of six men and on officer, 4 infantry units of eight men and an officer, and 6 artillery batteries of one gun and limber plus crew of four per gun, with, finally, a support unit of 1 wagon, four men and an officer. There were to be the standard number of staff officers as well.

At the moment I have two cavalry units and three infantry units. The artillery is complete, with half being Royal Horse Artillery (Langley castings) and the other half, recently completed, being based on a picture of the 3rd London Rifle Volunteers that appeared in ' The Blandford Encyclopedia of Infantry Uniforms, Book 2', with the Gatling gun being replaced with a field piece. 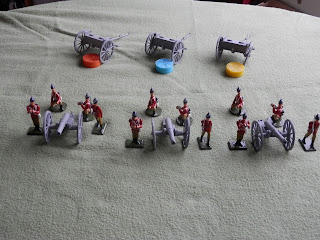 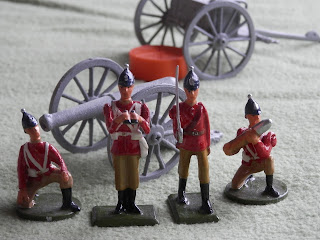 These again are Langley castings, but I've taken the opportunity to base the kneeling figures for stability. They are superglued to 2p pieces and the surface of the coin flooded with pva glue to hide the engraving. These figures have the eye painted as a line (eyebrow) and black dot.

The other style of eye painting I use is a blue dot. This can be seen in the following picture. 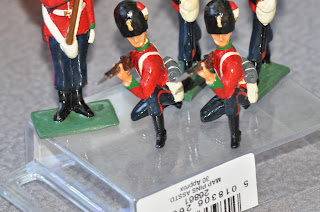 Next, I have a query you may be able to help with. At a swapmeet recently I managed to obtain a few figures from a rummage box. The left hand one is stamped 'Tradition', the two on the right are 'Britains', but the other one, with the corded jacket and feather hat is a mystery. I don't recall seeing anything like this before, but a reference to the above book gives an illustration of a similar figure labelled as a 32nd Middlesex Rifle Volunteers of 1860. 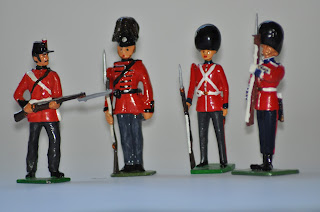 Can anyone identify a maker? Or perhaps it's a conversion. The nearest I can come is a Swedish Guard in the Dorset range.

Finally a little hint of something yet to come, and what I've been doing this week 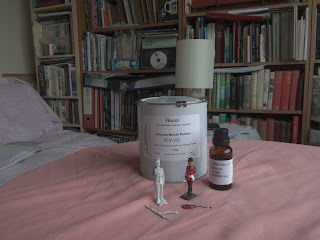 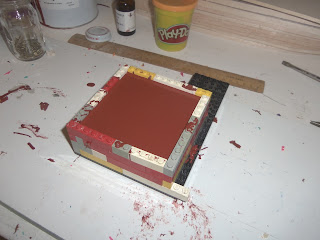 For the next couple of days I'm keeping my fingers crossed while the mould cures. Then, if all goes well I can start on some conversion work and provide some different Rifle Volunteer figures. This should keep the rest of the year occupied on this particular project. Army 'Grey' has been revitalised.