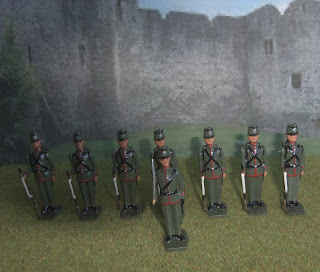 I finished off my little unit, based on a picture of the 43rd Westminster Rifle Vounteers. I use 8 figures, including an officer, as a unit, because this is the number in one of Dorset Figures boxes, which I'm using as storage. (Also, if I ever need to, I'll be able to sell them off as a boxed set!).

These are the last of my unpainted Fort Henry Guard castings, and I've spent the week rooting around the web trying to find a new source. 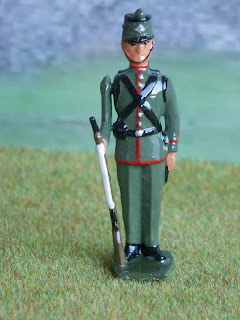 There's a chap in Canada has unpainted marching figures. An order has gone in for 8 figures to make up another unit, and I have some figures coming from 'Brigadier' in Australia for another. I'm trying to track down my original supplier (Pat Campbell of Replica Models) from about 12 years ago but he may have given up, though I notice a dealer on e-bay has a considerable number of painted sets under that label on offer. A message has gone out to him. I also contacted the Toy Soldier and Model Figure Magazine in case they had any contact details.

The other thing I tried was getting in touch with Giles Brown, of Dorset Soldiers to see if he had anything similar in his list. Giles has offered to make a mould for me if I'm unsuccesful elsewhere.

I have a modern 'Britains' Fort Henry figure, but it's not a patch on the old one, as the strapping detail is now all painted on in very thin lines, while the old one has it sculpted on.

While digging for more figures, at the back of my cupboard I found this little chap, who has to be MrsJs favourite from my collection. He's 'The Collector' by Luigi Taoti, an Italian maker who used to come to the London Toy Soldier Show. I haven't been for years, and find I'm very much out of touch with makers, dealers etc., so really must get this year. 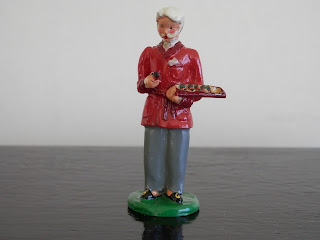 More progress reports next week.
.
Posted by joppy at 05:02