As promised recently, here is the second article from an old Hobbies magazine. This one is dated February 5th, 1916, issue number 1060, and is shared with permission of the current owners of Hobbies Ltd. I've written it out exactly as published, with the original illustrations.

BATTLES ON LAND AND SEA
A GAME FOR TWO PLAYERS.

This is a game for two players. The board is a sheet of thick cardboard, measuring 12in. long 8 in. wide, a rugged coast line forming the divisional line. The land portion is diversified with hills, roads, forts, etc., as marked in Fig.1. 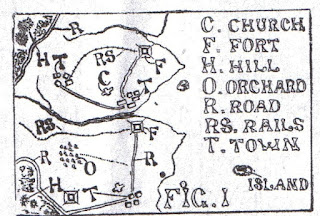 The lettering is fully explained on the ocean space, which may be studded with small islands. Several accessories are needed, and these can be fashioned from old ordinary bottle corks, a razor blade coming in handy as a cutting implement.

The fort F, Fig.2, consists of a whole cork with a piece of very thin card wrapped round, slightly overlapping, and glued in position. Then, after cutting the top edge and marking a window, the fort is glued upon a circular card base. Two of these will be sufficient.

The gun G requires a three-quarter length of cork, a recess wide enough and deep enough to take a black lead pencil easily being cut about the middle. A tube 2 1/2in. long, made by wrapping a 5in. length of notepaper round the penciland pasting or gumming the surface during the operation, is fixed within the recess, as shown in the plan and elevation. Four of these should be made. A bridge B is merely two half-circles of cork at the end of a cardboard plank. Three will be enough. A town T just for the sake of having a removable object, is simply a circle of cork about 3/8in. thick. Five towns are required. 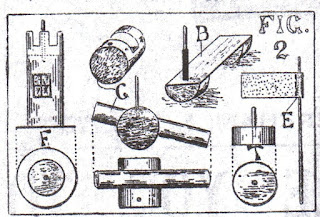 As will be noticed, the fort, the gun, the bridge, and the town are all fitted with a short thin flagstaff, and this is a very neccessary addition, as numerous flags of two different colours - twenty-four of each - must be made to slip on and off these uprights. After selecting the colours, cut strips of the chosen paper 4in. long, 1/8in. wide, and wrap them one by one round a knitting needle to form a tube, leaving a short length of about 1in. as shown at E, the tube portion being held in shape by gum or thin glue.

So much for the military; now for the navy. A primitive cruiser as C, Fig.3, is obtained from a third length of cork cut in two, the nose of the craft being shaped as shown by plan and elevation, while a short mast is added to take a paper flag when needed. Make four of this pattern.

For the battle ship B the sides of a whole cork are first removed, the remainder to then cut lengthways in two, and each half can be shaped at the bow as shown, two masts being afterwards inserted. Again, make four and also four submarines S. Cut a cork into four sections, slice away fore and aft, point both ends, and let a short mast occupy the centre.

Islands I., three of them, are the same as towns with half circles of cork on top. Each accessory should be enamelled some distinctive colour, the finished appearance more than paying for the time devoted to the task. A bag, stocking-shaped, will be required to hold a number of counters or pieces of cardboard bearing the words: "Town taken", "town lost", "cruiser taken", "cruiser lost", "hill taken", "hill lost", and so on; a pair for each object, and an equal number of blanks. 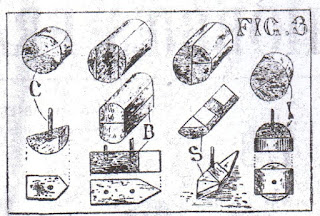 The two players are provided with the stock of different coloured flags. Each in turn dips into the bag. When a blank is drawn nothing happens, and the opposing player is entitled to dip. Anything gained he puts his colour on and places it upon the board. If a hill or any other permanent mark, the coloured removable flag is laid directly over the position. Anything lost must be removed from the board; if however, nothing of corresponding nature to that mentuioned on the slip is held by the drawer, his opponent puts one of his own colours on the board. Should it happen that the selected slip either gives or takes away when everything of that particular kind is already used, then the selector must dip into the bag until a definite result is reached. Every slip is returned to the bag immediately, so that a full supply is always in the bag. Before starting the game a certain number of draws for each player should be agreed upon, and the player then showing most colours on the board wins the game.

A cardboard box for holding the board and pieces can be cut and made from one sheet of medium thick card, as shown in Fig.4. Make the box portion A a little larger than the playing board, say 12 1/2in. by 8 1/2in., the sides S 1 1/2in. deep, and the lid portion B slightly larger than the box A as shown. Score all dotted lines with the point of a pocket-knife, bend downwards, and the diagonal corners will close as at C; then the pointed pieces can be bent and glued against the sides at D, making a strong corner. The ends of the hinge-line E should be cut trough to where the dotted portion begins, a strip of linen over the bend adds to the durability, and a coat of enamel gives a respectable finish. 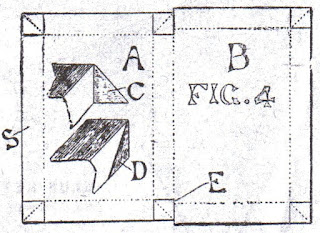 So there you have it. I wonder if such articles appeared in other magazines of the era? This game seems easily adaptable to the use of miniatures instead of pieces of cork, though I'm not sure the lack of movement appeals I'm sure that simple rules could be devised, while the board could become a small card table.