This year Christmas has been particularly confusing, trying to sort out who we can meet, who we can visit, who we have to avoid, etc. Normally it has been a case of getting everybody together at the same time, taking it in turns as to which abode we visit. This year was to have been our daughters turn, but if we went then our son would not be able to take his family, so we compromised by having his two (boy 13 and girl 5) for a few hours before the day while the parents went shopping.

Normally we play a family board game, such as Cluedo, Scrabble, Ludo, Snakes and Ladders; something for the adults but mainly the children. This year computers, Ipads, and other electronic things prevailed, but to get the two grandchildren away from temptation MrsJ found, at the top of the wardrobe, a game we used to play with our own.

"Take The Brain" is a simple (hah!) board game from the early 1970s, and is similar to chess but with only three types of piece. There are Numbskulls that can only move one space, Ninnys that can move unlimited spaces in a straight line, and a Brain (basically the King) who again can only move one space. The object is to 'kill' your opposition brain by occupying his square. 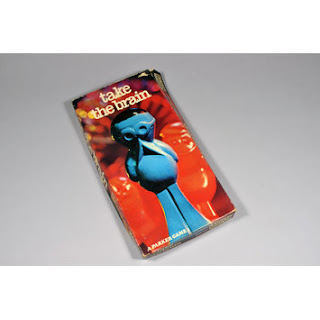 You may think it easy, but - each square has a number of arrows on it, pointing in various different positions. Some straight, others diagonal, and you can only move a piece in the direction one of the arrows is pointing!! Some forward thinking is involved, and you have to keep an eye on the squares occupied by enemy pieces as well as your own; you may end up thinking yourself safe, but in line from an enemy piece on the other side of the board. 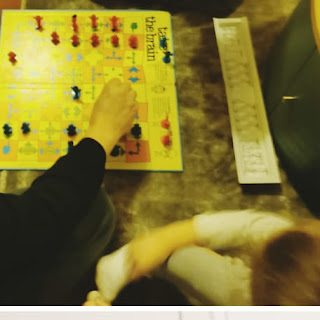 We ran through the game once with our two (5 and 13, remember) once and then the older one played me. I beat him the first time but was soundly trounced the second * (the crys of "I beat grandad" echoed round the house}. After that they both played it non-stop, enjoying it as much as each other. So much so that they've borrowed the game to take home.

Unfortunately the game is no longer produced, and I only found two for sale on that auction website, for over £30 each. If you can find a copy anywhere, I recommend it.

* I was so busy concentrating on my plan that I missed one of his Ninnys with direct route to my Brain.