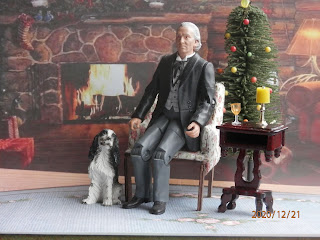 Hasn't this been a peculiar year? Most of us spending a great deal of it trying to keep away from people and being really anti social. One would think that our hobby activities would conquer all, but that doesn't appear to be the case on my part. I seem to have done less rather than more. Loads of 28mm soldiers remain unpainted, the various 54mm figures I'd planned to complete remain in their packets, three model railways (of various scales and gauges) seem frozen in progress and the garage workbench has gathered a layer of dust. Personally I blame MrsJ. She retired at the beginning of the year and keeps finding things to 'keep her occupied', trouble is they usually involve me too. So the days disappear, one by one.

I've made a positive resolution that for 2021 I shall escape to the garage or shed on a daily basis for a couple of hours, even if it only involves a bit of tinkering. My list of 'things I'd like to make' is yards long, the wood has been maturing for a few years now, and I have to prove to MrsJ that the tools in the garage are used, contrary to her belief that, just because I don't use them all regularly I don't need them is erroneous. The mortice drill, beading plane, router and planer may not come out every day, but they all have their special times.

In the meantime, I managed to throw together the header picture as a sort of Christmas card for this year. Normally the doctor would go out and about with us on our caravan trips, but he hasn't had a chance this year.

Merry Christmas everybody, stay safe, As the Chinese saying goes "This, too, will pass"