Book of the month

My wife and I are about to depart for two weeks in Wild Wales, half near Aberystwyth and half near Cardigan, taking the caravan and plenty of reading. Romantic bodice rippers for her, nice sedate murder mysteries for me. Just time to show you this book from my shelves. 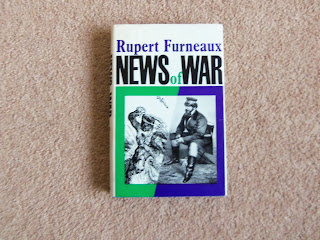 Published originally in 1964, I obviously obtained my copy second-hand as it has a dealers sticker and pencilled price (£10) in it. It deals with a lesser aspect of military campaigns, namely the activities and expolits of War Correspondents.
Starting with William Russell and the Crimean War, the various chapters cover the American Civil War, The Franco-Prussian War, the Russo-Turkish War, and various fracas in Oxus, Abyssinia, Ashanti, Zululand, the Sudan, Cuba, Greece, the Boer War, and Russo-Japanese War, ending on the eve of the '14-18 do.
Definitely worth reading, and perhaps a few journalists might appear in your game plans?
Posted by joppy at 03:35