A new Imagi-nation comes into being.

I'm thinking of disposing of my metal mountain of 18th century figures, as I've not had them out of storage for about four years, and will never have time to paint them anyway. During my recent trawling through the boxes to see what there is (a merry assortment of Rank And File, Fife And Drum, Willie, and others I came across a box containing a batch of Eureka 'Toy Soldiers' which were unpainted. I've done a couple of generals as practice and now have General Dogsbody and General Ignorance (I need a better name than that) and have cobbled a few trees in order to see how they turn out. 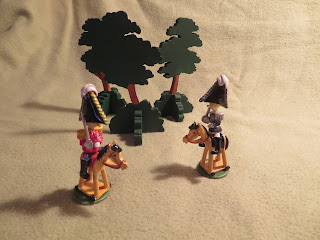 They were a bit top heavy, so I glued them to a couple of handy tiddlywinks. I can borrow the grandchildren's building blocks for houses and forts (Fort Not and Fort So), can have a couple of small forces as army red and army blue, set against each other in a 'Noddyish' land called Blytonia.
At the moment I have a couple of infantry regiments, a couple of cavalry regiments, and a cannon with crew. If I duplicate this for opponents I reckon I should have enough to get the grandchildren keen.
I'll be getting on to this project after Christmas, and it is my resolution for 2023.
In the meantime, Seasons greetings to you all, and all the best for next year. 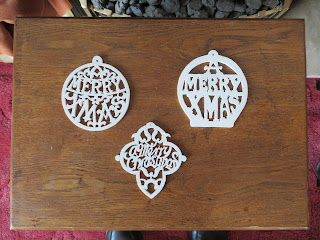