Hello, I've been away on a six week round tour of Scotland in the caravan, returning home last Saturday. During that time the country has lost its Monarch and slipped into an outpourng of nostalgia culminating in todays State Funeral. I caught up with the Lying in State, watching bits of the various TV coverages and it led me to wonder, What about making a 54mm toy soldier diorama of it? Would that be seen as bad taste? I thought I might proceed with the possibility of producing something for next years BMSS competition, so I've been browsing for appropriate figures.

Looking at photos it would appear that I need 4 guardsmen, 4 beefeaters and 4 Gentlemen at Arms as a minimum, preferably at attention, that I can convert. I can see that there will be a bit of work in bending heads and especially in producing the 'reversed arms' involved. I've discovered a Beefeater and Gentleman as kits on the Tradition site and ordered one of each to start with, and I think I can use my Prince August moulds to produce the guardsmen.

I'll use this as an autumn project, and drop in occasional progress reports as I go. 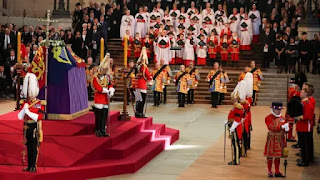