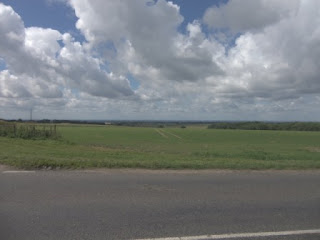 Here we have a picture of a perfectly innocuous field in the middle of no-where on the edge of the Lincolnshire Wolds. The only clue to it's past is the name - Slash Hollow. This is where the routing forces of the Royalists were cut to ribbons by the pursuing troops of Oliver Cromwell and Sir Thomas Fairfax after the battle of Winceby in 1643. 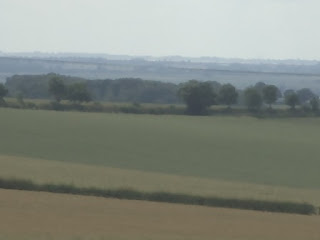 And here we look in the opposite direction to view the field of battle itself.

Winceby, as a village, no longer exists. You can drive through it without noticing it was once there. The extent of the field is minute, only about half a mile from one side to the other. With some 3000 troops in the Royalist lines and about 4000 with the Roundheads, more a skirmish really. The whole area would fit onto a normal table if gamed. 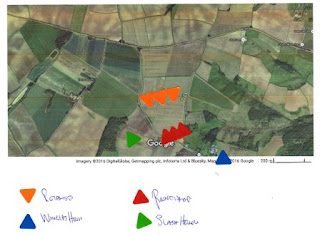 Satellite picture care of Google Earth, shows the disposition of the two armies, and the relative smallness of the area.  While tucked away off the main road (The line running left to right along the top of the picture) the site is easily viewable. The battle was a Roundhead victory, enhancing Cromwell's growing reputation, and showed that the Parliamentarian cavalry was every bit as good, if not better, than that of the Crown.

More information can be found in_
British Battlefields, The North - by Philip Warner, (pp79/86)
Battles and Generals of the Civil War - by H.C.B.Rogers, (p110)
Winceby and the battle - by Betty Brammer ,
(A 102 page book that goes into much detail of the events leading to, during, and after the battle; including some interesting stories about what the civilian residents of Winceby did to keep themselves and their property safe. Something often forgotten in tales of war.