Visit to Lincolnshire, part one

Over the last few days MrsJ and I have been caravaning on the edge of the Lincolnshire Wolds, visiting old haunts as I come from Boston. Yes, that Boston, the Brexit one! In support of their voting I must say in their defence that there have been more violent crimes over the last few years than the previous thirty, and most of the names in the local paper court reports have more consonants than vowels. The residents voted not out of racism, but an objection to the numbers involved.  But enough.

While there we had a little ride round the Wolds, and having just watched the first series of The Hollow Crown (I'm behind with my TV planner viewing) we called in to the village of Old Bolingbroke. You will now ask "where?" This is a very small, perhaps 30 houses in all, village, just on the southern edge of the Wolds, and is extremely important in British history. The castle here was the home of John of Gaunt, and birthplace of Henry IV. Really, you could say the Wars of the Roses started here!

Looking at the remains of the castle now, just a few walls none taller than six feet high, you wouldn't credit it's early importance. Built around the 1200s it occupies ground would take up about half a football field, and that includes the moat! It is one of the few English Heritage sites we have visited that has no entry fee or shop. Indeed, the sign at the gate states "Opening Times - Any Reasonable Time" Mind you, there is only parking for about three cars outside, though the pub is good. 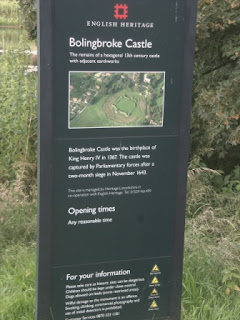 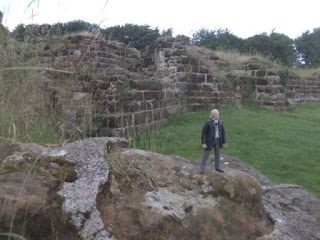 This gives an idea of the size, as you can see from one side across to the other here. Apologies for the intruder, he gets everywhere these days.

Next time, views of Winceby battleground.
Posted by joppy at 09:28