Book of the Month 1

While I was in town with the wife, clothes shopping, I was left in Waterstones to browse (she knows I can spend hours in a decent bookshop) and came out with this one. 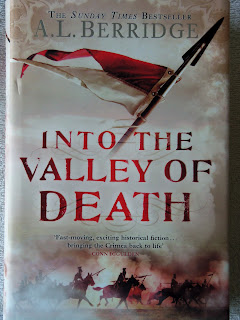 It was on the 'new' shelves just inside the door. Not an author I know, but has written a couple of books which I may seek out now.

This is a novel following the exploits of a cavalryman in the Crimean War, starts of as a corporal, goes down to private, up to sergeant and ends the book as an ensign, having fallen foul of his RSM, fancying the RSM's wife, disobeying orders, not thinking much of most of the officers in charge, and generally getting himself involved in all the major battles of the war. Written very much in the 'Sharpe' vein and using, as its basic plot, the (factual) mysterious Staff Officer from the battle of the Alma. I won't give any spoilers, but it is an enjoyable read. Can't see it as a series though, as the wars practcally over by the end of the book.