The Massacre of Mankind - Book Review 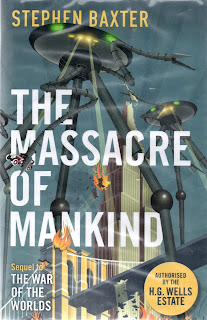 I've just finished this book, which seems to have s lipped onto the local library shelves fairly quietly. From the pen of Stephen Baxter, an author I know as collaborator with Terry Pratchett on his 'Long Earth' series, but I see from the list of his works is a prolific Science fiction writer; the book is, as it states on the cover, a sequel to H.G.Wells' original 'War of the worlds', and is starts in 1920 (the original set in 1907) in a world where history is not quite the same as reality.

For example, the authorities have been working on the leftover Martian technology and have developed new metals, one of which enabled the great liner Titanic to survive collision with an iceberg on her maiden voyage. The military have been trying to get the Martian heat ray guns to work without much success (we find out the reason during the story), and Britain is still suffering from the destructive affects of the earlier invasion.

Other little changes are often throwaway comments. Lord Baden-Powell runs a quasi-military group called the Junior Pioneers. The suffragette movement is now illegal and women do not have the vote.

One of the main, understated changes, is that WW1 has not happened as it did. Germany certainly started a war, with a lightning strike through Belgium putting France out of action before turning her full might onto Russia (an Eastern Front which is still fighting). The United Kingdom had previously made a non-aggression pact with Germany and abandoned her ostensible allies at the crucial time. This 'Schlieffen War' uses tactics and technology developed from alien artifacts.

The story starts with a new invasion of England by more cylinders than the 1907 landings, with sightings of more to follow. It turns out that the Martians learned from their earlier failure, as their methods have changed and mankind is still unprepared and helpless against the machines.  A number of characters from the original book appear again, and it is refreshing to find that the central character is not the gung-ho hero as usual, but a fairly normal though resourceful lady journalist.

I won't go into detail of the plot, but the book does end on a sort of will they, won't they come again question, and a plan by Winston Churchill to take the action to Mars.

An interesting read, probably worth rereading the original first, for background, and could give those of you who have gamed the Tripods some new ideas and themes.