I'm catching up on half-started projects quite quickly now, though I don't have long. MrsJ has requested (told me) that I make a another small cupboard/dresser for use as a changing table for the new granddaughter. That's me in the garage for a few weeks again once we return from France at the end of May. The infantry rebasing goes on apace, a second unit is done and a third 25% done, but here is the subject of todays post. 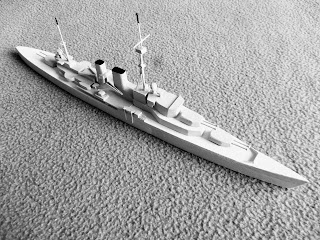 HMS Exeter patrols the South Atlantic, waiting for the rest of the squadron to join her.

The model is as finished as she's going to be, and is quite adequate for battles out on the lawn. A bit rough when seen close up, so please don't enlarge the picture too far. The above is in modern colour, while below is the WW2 black and white version.Unfortunately, in neither version does the deck to hull colour difference stand out. 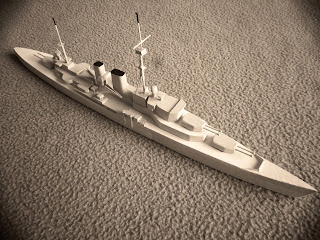 The other two ships are under construction now, while the Graf Spee is roughed out.I may be taking them in the caravan with me, though probably won't get any work done on them. (We'll be part of a family group of eight, so I've got to 'socialise'!)