About to head off to Leamington Spa for the Model Boat Show, and notice that one of the stands is labelled as 'The Spithead Review'. I did a quick google and came across this photo of part of what looks like a massive display of miniature ships. I'm taking two pocket cameras and checked the batteries are fully charged, so should have plenty of pictures to show you next entry. 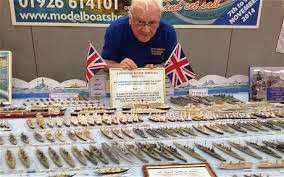 ps, this looks like a totally different display to the well known 'Matchstick Fleet' of Philip Warren, which is occassionaly seen in the south, as the models seem smaller.
Posted by joppy at 11:38