It has been a while since I put anything up here. I blame the gorgeous weather we've been having, as not being conducive to painting indoors. However, MrsJ and I have just spent 7 days up in the Lake District in the caravan, just by the shores of Lake Coniston, and in the odd bits of spare time I've managed to paint a couple of prototypes for a new Rifle Volunteer unit.

As some of you may know, I continue my search for an ideal figure to fulfil the role of the early style uniform, utilising the long frock and low shako (though some of the units had variations on coat and headgear which makes the search interesting). Recently while trawling e-bay I came across a box of Armies In Plastic ACW Confederate Marines which seemed to fit the bill, so ordered one. 20 figures including two officers - the makings of two units if they worked.

Digging out my references I found this 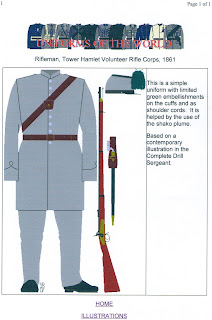 from www.uniformsotw.com CD 17 - Britain's Volunteers of the 1860s.

Some work with a small model railway track pin and some miliput produced plumes, and I was able to paint up one officer and a rifleman. I took a few liberties with the equipment colouring, but the essentials are there. Now I have to do the rest of the unit, then the second one will have pom-poms rather than plumes, and a different base colour (I'm thinking the green of the Robin Hood Rifles). 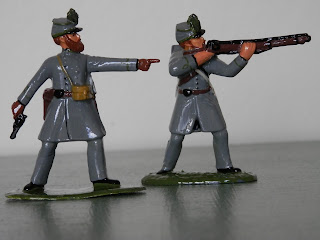 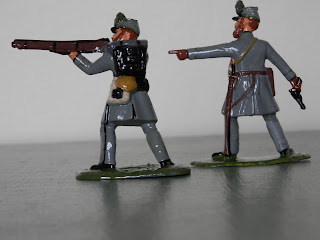 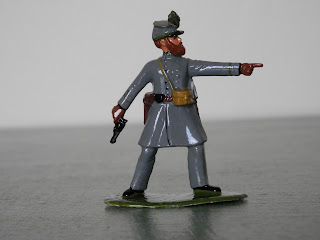 I shall have to do something about the officers double breasted jacket though.

I've made myself a promise that I won't start any more paint jobs till I've finished the seven already on the go are completed! This is on top of all the other things going on in the shed concerning model railways and model boats. I thought retirement was supposed to be a life of ease and reflection?